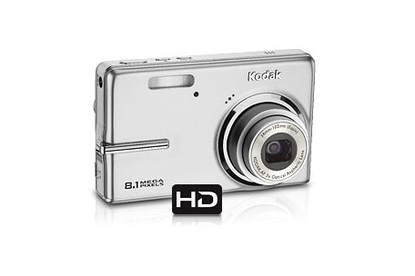 While the Kodak EasyShare M893 IS carries a relatively low price tag, it can be slow at times while the image quality leaves a little to be desired at times.

Kodak's EasyShare M893 IS is the company's latest top of the line compact, packing in a variety of features such as face detect and optical image stabilisation. While it does present a relatively attractive option thanks to its price tag, its images have a few noticeable flaws such as poor colour balance and high chromatic aberration levels, meaning this unit does little to stand out from the crowd.

Sporting an 8.1-megapixel sensor, the M893 IS's photos are suitable for small and medium prints for the most part, if you can put up with a few issues. The worst of these is the colour balance. This model has limited white balance presets (there is no cloudy option for example) and the automatic mode struggles in indoor conditions.

Furthermore, the colour reproduction really is quite skewed. In our outdoors shots leaves often looked almost yellow while blues were a little darker and duller than normal. The overall balance was too strongly saturated. Imatest backed these results up, giving this model fairly poor scores across the board in the colour checker tests.

Image noise also proved to be an issue although only at high sensitivities. As with many compacts, everything up to ISO 400 was usable for most print sizes, although even at this level there was a fairly prominent colourful haze on our shots. At anything higher graininess really began to set in and a lot of clarity was lost in the noise.

On the whole, however, sharpness was fairly good. Edges were crisp without being over-sharpened at all and clarity was at the level we'd expect from a sensor of this resolution. There was some fairly hefty chromatic aberration, particularly noticeable as haloing on high contrast areas.

In our speed tests the unit was a little sluggish. The 2.7in LCD has quite a slow refresh rate, which means the time between pushing the shutter button and capturing an image can be upwards of 0.2 of a second which is extremely high. If you time it by looking at the subject rather than through the screen this is reduced to about 0.1 of a second. Meanwhile the start-up time was also quite slow, clocking in at about three seconds, whereas shot-to-shot time was a relatively speedy 1.5 seconds.

The feature set is relatively robust but fairly standard for a compact camera at this price point these days. Face detect is included for all your portrait taking needs and there is also optical image stabilisation which works quite well. On the calibration front you can adjust image sharpness and colour mode (although none of these really help fix the aforementioned issues) as well as picking metering and autofocus modes. There is also a burst mode, although it operates at a somewhat sedate 1.6 frames per second.

This unit doesn't depart much from Kodak's standard design philosophy, which is fine but certainly means it doesn't stand out in a crowd. It has a plain silver colour scheme and a boxy build that feels quite sturdy but looks quite standard.