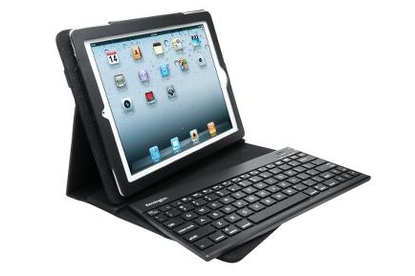 The Kensington's KeyFolio Pro 2 for iPad provides a reasonably typing experience and the fact that the keyboard is detachable is a nice touch. However, it adds significant thickness to the svelte new iPad and the keyboard does feel a little flimsy when removed from its case.

Kensington's KeyFolio Pro 2 was initially designed for the iPad 2, but the company has confirmed that it also fits the third-generation iPad, too. It offers excellent protection for the new iPad and the keyboard provides a decent typing experience, but it isn't without its flaws.

Kensington describes the KeyFolio Pro 2 as three products in one: a removable, magnetic keyboard, a smart case and a multi-position stand. While this is definitely creative marketing, the fact the keyboard is detachable is a nice touch. It uses handy magnets to effortlessly click into place and is easy to remove.

The KeyFolio Pro 2 case itself is very business looking, so it's likely to attract corporate users first and foremost. It is made from leather-style synthetic material and is secured close by an elastic band that wraps around the outside of the case. Cut outs for the iPad's camera, lock button, volume keys and dock connector are all available, though the hole for the camera and the home button aren't exactly centred. The KeyFolio Pro 2 does add a fair bit of bulk to the new iPad in order to accommodate the keyboard and the protective case.

Kensington says the case automatically enables the iPad's wake and sleep modes due to a magnetic cover, but we couldn't get this feature working on our new iPad. Some new iPad users have reported issues with the same feature working on a range of smart covers (including Apple-made ones) so we suspect this isn't an issue specifically with the KeyFolio Pro 2.

The KeyFolio Pro 2 can be positioned at various viewing angles thanks to velcro-style lining. Detaching the keyboard means you can extend the angle range even further. Unlike many other keyboard cases, the KeyFolio Pro 2 is comfortable to use on your lap and doesn't topple over.

Connecting the Bluetooth keyboard to your iPad is a simple process. Simply turn it on, press the connect button in the top right corner of the keyboard and go to the Bluetooth settings menu on your iPad to connect it. The iPad will prompt you to enter a four digit code using the keyboard to finalise the connection. The keyboard charges via USB and Kensington includes a USB to micro-USB charging cable in the box. Small LEDs to denote caps lock, Bluetooth connection, charge and power are a nice touch.

Kensington says the KeyFolio Pro 2's battery will last for up to 100 hours with 60 days standby time, so you shouldn't need to charge the unit very often.

Typing on the KeyFolio Pro 2's keyboard is generally a pleasant experience.The keys themselves are spring loaded and reasonably well spaced, though if you're coming from a full sized keyboard it will take a while to get used to the slightly cramped layout.

The KeyFolio Pro 2's keys are raised enough to provide good tactility when pressed. A row of iOS function keys sit on the top row of the keyboard and include functions like hiding and showing the on-screen keyboard, spotlight search and media playback controls, though you'll still need to tap the iPad's screen for functions like copy and paste.

The KeyFolio Pro 2's keyboard does feel a little flimsy when it's removed, so we preferred to use it inside the case.