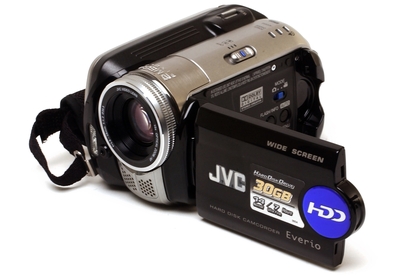 The GZ-MG77 is an above average camcorder, but it’s let down on occasion by poor video quality.

The GZ-MG77 is one of JVC's mid range hard disk based camcorders and with a 30GB hard drive, 2.2 megapixel CCD and true 16:9 video, this machine is no slouch and is very reasonably priced for a HDD camera. However it is let down by occasionally excessive compression artefacts and mediocre still image performance. Still, for anyone looking for an affordable way in to the HDD camcorder market, the GZ-MG77 could be a good bet.

The key feature of HDD camcorders is the large quantities of storage they offer, without requiring you to change media. The GZ-MG77 more than satisfies in this area, offering seven hours of high quality recording, or up to 37 hours at lower qualities. At the highest quality settings the GZ-MG77 exhibits decent video performance, though it is marred by a few compression artefacts. These are especially noticeable when panning rapidly, which gave the classic mosaic pattern often seen with MPEG-2 compression (see test shot one), and on rapidly moving objects, which displayed noticeable ghosting (see test shot two).

When filming slower moving objects the camera performed much better, with accurate colours and minimal noise. The stationary background of test shot two is indicative of this. The GZ-MG77 certainly equals the performance of most DVD camcorders, though falls short of the quality of Mini-DV. Using the lower quality recording settings proved to be disappointing, with much higher levels of artefacts, so we'd recommend sticking to the seven hour setting.

Unfortunately, like the camera's more advanced sibling, the Everio GZ-MG505, the GZ-MG77 also suffers from poor quality still images. Although the 2.2 megapixel resolution isn't too bad, images suffer from graininess and fringing, and also lack sharpness. Looking at the blades of grass in test shot three, this fringing is apparent along the edges. Colour inaccuracy has also crept into the bricks in the background, which are shown with a grainy green and red haze.

It's a shame that the GZ-MG77 suffers from image quality problems across video and stills, as we very much liked all other aspects of the camera. The whole Everio range is exceptionally well designed, with an easy to hold, lightweight frame. The slim silver finish design looks the part and the camera includes an adequate 10x zoom. We were also pleased with the very solid construction.

JVC has included a 2.7in widescreen LCD, but there is no viewfinder, presumably to save on space. Navigating through the menu is achieved by using a small five-way directional pad that sits next to the LCD. This is useful for changing settings when you don't want to look away from the screen. The GZ-MG77 offers a fully automatic mode, but also includes complete manual controls including gain, aperture, shutter speed, white balance and focus. These are primarily accessed through the directional pad, which is simple and effective, though not as useful as having a dedicated focus ring.

At some point it becomes necessary to move the video from the hard disk, as 30GB fills up fast. The simplest option is transferral to a PC or Mac, and the camcorder can simply be plugged in using USB to do this. Videos can easily be transferred using drag and drop and played back on the included software. The camcorder can also output directly to a DVD burner, negating the need to use a PC. There isn't much in the way of other connections though, with no microphone input, or Firewire. Video is output to television via composite or S-Video. Battery life is average, at a little under an hour.

Overall the GZ-MG77 is a decent camcorder. It may not have the best image quality, but for portability, build quality and length of recordings, it's a great option.