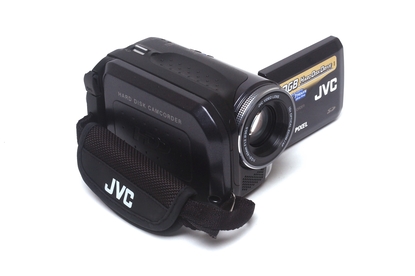 A very reasonable alternative for those who want a digital camcorder without the hassle of carrying around spare media.

The JVC GZ-MG50 is one of a new breed of hard disk based digital camcorders. It was inevitable with the popularity of hard disk based mp3 players that someone would marry this technology with digital camcorders, and at the moment the only company to do so is JVC. This model is particularly useful, as it combines a massive 30 gigabyte hard drive with the ability to slot in SD memory cards. With several cameras operating entirely on flash memory, the GZ-MG50 has a big advantage, having all the flexibility those models have and more.

The camera follows a fairly traditional digital camcorder build. It is well constructed, cased in dark grey plastic with the screen flipping out to the side. The grip fits very nicely in the hand and there is a groove along the top to rest your fingers in. The major controls are perfectly placed with our first finger falling naturally onto the zoom switch and the thumb landing on the record button from the second we picked it up. The same cannot be said for the directional pad, hidden behind the screen. We found it a little irritating to have to turn the camera constantly to ensure we were hitting the right keys.

The screen is serviceable, but not standout. The viewing angle was quite good, but it was also very bright, with a strong emphasis towards whites and creams. Overall, we found the image looked quite washed out. There is no viewfinder and because the LCD is the only means of tracking your subject, we would have liked a slightly better quality screen.

The single 1.33 megapixel CCD produces reasonable video. It too had a tendency towards being too bright and there was a little image noise, particularly around light sources. We liked the 15X optical zoom, which is a little higher than we're used to seeing on models of this size. The maximum video resolution is 720x576, however JVC have gone with the MPEG2 video format which poses a definite problem for serious video editors. Many pieces of professional software don't support MPEG2, which makes it a less than ideal choice compared to something like AVI or MPEG4.

The still photo taking functionality is quite good for a video camera at this pricepoint. There are a plethora of manual shooting options, such as aperture, shutter speed, whitebalance and exposure. This is the sort of comprehensive list one expects to see on a high end advanced camera or an SLR. Unfortunately as the sensor is only 1.33 megapixels so the end result is less than fantastic. While the pictures are reasonable to look at, they won't compete with even the most basic point and shoot still camera.

The JVC GZ-MG50 ships with a massive 30 gigabyte hard drive as standard and when one considers that a standard DVD disc holds a mere four gigabytes, this is ample storage space. This translates into roughly twenty hours of average quality video, or rather impressively, about seven hours of high quality video. The downside is that the user must regularly clean the hard disk and transfer files onto their PC, rather than being able to store them on individually labelled tapes or discs. This is somewhat remedied by the support for SD memory cards.

We managed to record 45 minutes of footage on the hard disk before the battery ran out, which is slightly below average.