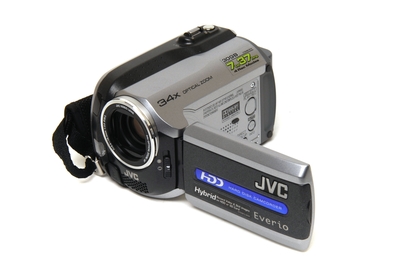 Despite offering an average video performance, this is a fairly solid hybrid device that we have little hesitation in recommending to casual users.

With a suggested retail price of $899, the Everio GZ-MG135 is one of the cheaper HDD/SD hybrid camcorders on the market. For your hard-earned clams, you get a 30GB hard drive which can store up to 37 hours of standard-definition footage, a 34x optical zoom lens, plus a memory card slot for SDHC/SD recording (SD cards will need to be bought separately). As we have seen with other JVC-branded camcorders, the GZ-MG135 offers a fair-to-middling performance across all areas, while excelling at none. Its low-grade sensor is incapable of producing especially sharp or vibrant video, yet it does churn out acceptable results for the asking price.

Continuing the current trend towards camera miniaturisation, the JVC GZ-MG135 is a blatantly cute and compact device, measuring just 66x71x110mm and weighing a mere 300g. While not quite as slick as certain other hybrid units we've seen, the silver-and-charcoal chassis looks suitably attractive nonetheless. It should easily fit into most jacket pockets and definitely won't weigh you down; an obvious boon for the frequent shooters' club. Unfortunately, its flimsy nature may pose a problem for inexperienced operators, as it is sure to contribute to camera shake despite the presence of an image stabiliser. With a little determination and practice however, most users will be more than capable of capturing smooth results.

For the most part, we were fairly impressed by the build quality and control layout of this camera, with only a few minor issues dampening our enthusiasm. Similar to the Canon range of camcorders, it employs a directional stick for menu navigation; located to the right side of the LCD display. This is a curious placement for a directional stick, as it requires the use of both hands whenever the camera is being held. While not as intuitive as the thumb stick found on Canon's assorted offerings, it nevertheless proved responsive and easy to operate.

Likewise, we found the menu system a breeze to navigate, exhibiting none of the fruitless hunting and backtracking that we've seen from other cameras (step up DCR-HC38). We were particularly enamoured with the on-screen 'scroll wheel' for selecting AE modes, as well as the easily accessed informational displays. Rest assured, this is definitely a user-friendly camera that even the most inexperienced user will find easy to get to grips with (in a nod to mums and dads, it even lets you know if the lens cap is on).

When it comes to recording video, the JVC GZ-MG135 offers four varying modes of quality, from economy to ultra-fine. At its highest setting, the camera will only record around seven hours of footage to its hard drive, though this should still see you through several days of shooting. Naturally, once your disk space has filled up, it's just a simple matter of transferring your video to a PC or burning it to DVD. This is made easy thanks to the handy Direct DVD and Direct Backup buttons located on the camera. (USB and FireWire ports are naturally both included, along with a special docking station.)

Being a hybrid device, the GZ-MG135 is also capable of recording to SD memory cards, which currently come with a capacity of up to 16GB (32GB versions are also in the pipeline). This media is ideal for storing and transferring your digital photos, as well as any videos you'd like to swiftly share with others.

During our testing, the video performance of the GZ-MG135 proved to be a bit of a mixed bag. While it is perfectly adequate for entry-level users, more discerning videographers will be left unimpressed by its average picture quality. Equipped with a single 0.8-megapixel CCD sensor, its output is miles behind the latest high-def models -- but then, for a unit under $1000, this is to be somewhat expected. If you can get past the erratic auto-focus and slightly muted colour scheme, it will prove a worthy chronicler of family outings, events and holidays. In other words, only the casual crowd need apply.