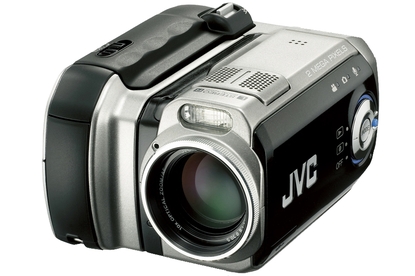 Using the microdrive is a great idea and works well in this unit.

With the Everio GZ-MC200 camcorder, JVC takes an interesting approach to the problem of storing large amounts of high-quality video on digital media. Where some camcorders, such as Sony's DCRDVD201E, have renounced DV tape in favour of 8cm DVD discs, they suffer the drawback that the current discs, at 1.4GB, are limited to about 30 minutes of high-quality MPEG footage. JVC's approach is to use a 4GB Microdrive--the CompactFlash-sized mini hard drive produced by Hitachi.

Microdrives are most commonly used as high-capacity CompactFlash card substitutes in digital cameras or in digital music players, but the 4GB capacity of the Microdrive (and new models have pushed that capacity even higher) and its comparatively fast write speed make it another efficient recording media for digital video. The JVC's supplied 4GB disc can store 60 minutes of MPEG-2 video at an ultra-fine-quality setting. The handycam is also compatible with high-speed, but expensive, 8GB CompactFlash cards, so you have the intriguing possibility of recording 120 minutes of ultra-fine-quality video.

The Everio's storage solution is both its strength and its weakness. Unlike MiniDV tape or DVD discs, CompactFlash cards and Microdrives are not cheap, disposable solutions. Once you've exhausted the Microdrive's 4GB capacity you have only two options: transfer your video to a PC or put in another expensive Microdrive or high-capacity CF card. This makes the Everio an ineffective solution for taking on holiday (unless you take a notebook PC with you). It's not suitable for someone who simply wants to shoot video and never go near a PC either, since the only way to archive your footage is to transfer it to a PC and then burn it to a DVD.

Like DVD disc camcorders, the Everio has the advantage of instant playback; you simply browse through thumbnails of your recordings on the screen, so reviewing what you've just filmed is dead easy. And when it comes to transferring your video, you can either use the camera's USB 2.0 port, or simply pop the Microdrive in a card reader attached to your PC.

The other notable feature of the Everio is its size. It's tiny, sitting easily in the palm of your hand. While this certainly makes it very portable, there are downsides. There is no room for a viewfinder, so you must rely solely on the 1.8" LCD screen when filming. Nor is there room for a hot shoe to connect accessories like an external microphone or video lights.

You get a 10X optical zoom lens and effective image stabilisation with the JVC, which makes using the zoom practical for shooting handheld footage. In addition to the CF card slot there is an SD card slot, so you can record stills to an SD card and save your Microdrive for video. The Everio also takes good video--sharp and detailed--although in low light it tends to lose colour saturation. It can take stills up to 1600 x 1200.

But the Everio is not a cheap option. I like the use of the Microdrive, and as someone who rarely takes video directly from camera to disc without processing it through an editor first, I don't mind the disadvantages that come with using such media. But for such a high price I also want some extra features--the ability to connect optional accessories like external mics and video lights--and can't help feeling JVC would be better packaging this technology in a larger body.