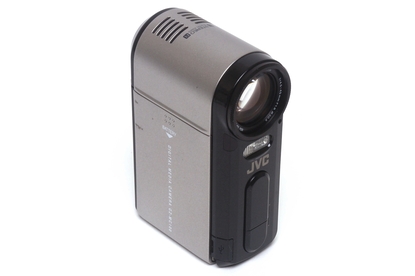 A decidedly functional camera, delivering a very solid performance across the board, although at times sacrificing performance for simplicity.

The JVC Everio GZ-MC100 brings a bevy of features and options to a somewhat unique design. The image quality (both for still and moving images) wasn't particularly outstanding on this camera, however its removable hard disk drive gives it a level of flexibility unmatched by other recording media.

Design-wise, the Everio is unlike any camera we've seen. Tall and slim, the entire range of controls is located solely on the back of the unit. We felt it was uncomfortable and awkward attempting to hold the MC100 in the same way as other digital video cameras, but that when gripped like a pistol, or perhaps a glass, operation became easier and immiediately more comfortable. Ultimately, this different design provides no discernible benefits over others, but comes down simply to a matter of personal preference. While we do anticipate that veteran digital video camera enthusiasts might find this new grip irritating, it poses no problems at all for the average user.

The controls themselves are fairly basic. A record button and a zoom lever are located within easy reach of the thumb, while a playback and menu navigation lever sits above a switch to toggle the various off, record, and playback modes of the camera. The entire camera is designed to be operated with one hand, and in fact, the only time that you will need to use two hands is when plugging in or unplugging cords, or unfolding the 1.8" LCD display. The LCD screen can swivel up to 270 degrees, so that the user can point the camera at themselves and still see the display, which is great for recording footage of yourself without cutting off everything above your eyebrows.

Video recording is still the big feature on the MC100, and generally it does this well. Settings are fairly standard, providing some basic options for different shooting environments, and allowing users to achieve reasonable quality in most situations. A 10x optical zoom gives the MC100 a slightly limited range. This is made up for partially by digital zoom, taking the total level as high as 200x. We found that at this level, however, quality and image stability were generally too poor to justify the increased zoom. Even with the inbuilt image stabilisation, a tripod would be needed to achieve smooth recording at full zoom levels. A few other options, such as wide/tele macro modes, and an option to reduce wind noise, round off the JVC's video feature set nicely.

The big advantage of the Everio is its hard disk drive. Unlike cameras which record to cassettes, DVDs, or memory cards, the MC100's 4GB (default) hard disk allows for a lot more to be done on the fly. Titles can be deleted quickly to make room for more footage, and various effects, such as sepia, strobe, and classic film can be applied to a recording during playback, without changing the recording itself. A range of wipe and fader effects are available, and serve as an interesting introduction to a recording when used. Videos, once recorded, can be transferred to a PC via a USB cable, edited on compatible recording units, such as VCRs and DVD/Hard Drive combos, or even displayed on televisions or projectors, via an AV cable.

The MC100 does come with more to its arsenal than simply video recording. It's capable of capturing images to Compact Flash or SD Memory Cards, and while the quality on these is relatively impressive, a lack of options restricts the level of control users have over their photos. Quality and image size can be selected via the menu, while continuous shooting and self-timer functions help to expand the usefulness of the still image capture. The lack of advanced manual features hinders still image capture overall, but at least allows the feature to be presented in a much simpler fashion.

A voice recording mode is also available on the JVC, but the lack of an ability to attach a separate microphone really detracts from what could have been an impressive, even if questionably useful, feature.

Overall, there isn't a lot wrong with the Everio GZ-MC100 and what it does, it does well. If there's a flaw in its design, it's that the features included wouldn't be quite powerful enough to attract serious enthusiasts. Nevertheless, the simplicity and flexibility of the MC100 make it an excellent way for beginners to gain an impressive entry into the world of digital video recording.