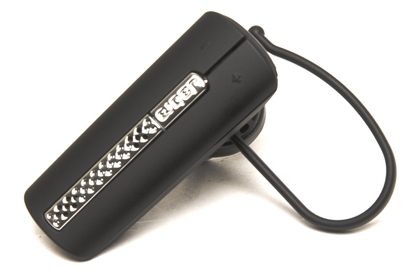 The BT530 isn't a bad headset, but if you can do without the USB adapter then it's best to look for a cheaper alternative.

Bundled with a USB adapter for combined PC and mobile telephony, Jabra's BT530 is a multiuse Bluetooth headset that commands a hefty price tag. If you don't plan on using its multipoint Bluetooth feature, we suggest looking at the far cheaper alternatives available.

Often criticised for their appearance, Bluetooth headsets are these days as much about fashion and style as they are about communication and performance. The BT530 is in the same boat: its matte black finish and thin ear hook combined with a chrome panel in the middle certainly looks the part.

More importantly, it's also comfortable to wear; this is critical considering the target market of both PC and mobile phone users. Jabra includes a whopping eight different sized "ear gels" in the sales package, as well as two ear hooks. The rubber ear gels are quite frustrating to remove, but once fitted provide a firm and snug fit in your ear.

Set up is as simple. The unit has just four buttons: a power switch, volume up and down keys and a call-handling button. Simply turn the unit on and then hold down the call-handling button to put the BT530 in pairing mode, which is denoted by a steady blue light. Once connected, the light will begin flashing at periodic intervals.

Jabra bundles the BT530 with an A330 Bluetooth USB adapter. Thanks to multipoint technology — which allows a single Bluetooth device to connect to multiple devices — you can connect the headset to a mobile phone and your PC simultaneously. It's plug and play, allowing it to work with a number of programs including Skype, MSN Messenger and many VoIP soft-phone applications. Jabra claims the A330 has a range of up to 70 metres. We tested it in an office environment and it worked without any issues through walls and doors.

The quality of voice calls is disappointing considering the price tag. While our callers didn't have any complaints about outgoing audio, incoming audio suffered from a lack of depth in volume. It was difficult to hear at times in noisy environments, especially with wind noise. Jabra claims its advanced sound control eliminates background noise, but we still feel this could be improved.

Annoyingly, Jabra doesn’t bundle an AC charger in the sales package, instead relying on a USB charger.