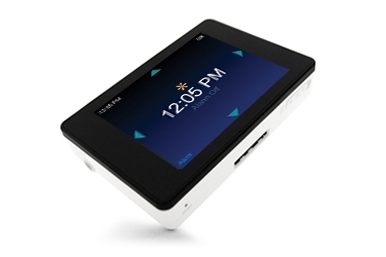 If your main concern in a media player is video, we'd recommend looking elsewhere; but if you want a sleek all-rounder that will easily fit your pocket, the iRiver U10 is hard to pass up. Compact and well-made, this is a versatile if pricey effort.

If small, ultralight media players are your cup of tea, iRiver's U10 could be just what you need. This flash-based device weighs just 70g and is approximately the same size as a small stack of business cards.

The U10 has a bright 2.2in display with the same 320x240 resolution as Apple's 30GB video-enabled iPod. The player is a delight to use - its fits beautifully in the palm of your hand and has just the right number of surface controls (power, volume, screen orientation and lock, all located around the edge of the device). The unique navigation system permits you to press the margins of the U10's (admittedly smudge-prone) screen to steer through the menus.

The iRiver supports an impressive range of media formats. It can handle MP3, WMA, and Ogg Vorbis music files up to 320kbps (kilobits per second), as well as MPEG4 video playback; and it can take recordings from its digital FM radio or via its built-in microphone. It can run Macromedia Flash Lite games, too, and display text files and photos.

As much as we liked the U10, we were surprised by its lack of bundled video software. Instead, the manufacturer suggests you try free alternatives such as iRiverter. With this third-party utility, it took us about five minutes a pop to transcode half-hour XviD and DivX test videos to the U10's specifications, which are 15fps (frames per second), 384Kbps video and 128Kbps audio. Audio quality was top-notch, and the video itself was quite watchable, with few artifacts and far less jerkiness than we had expected, given the player's rather low frame rates. A two-and-a-half-hour charge supported either 22 hours of audio playback or four-and-a-half hours of video.