iRiver Spinns you right round. 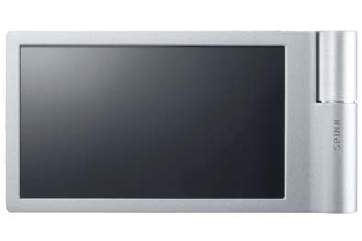 If any player could make fashion-conscious iPod users jump ship, it's this one; it may be the one digital music device that has more aesthetic appeal than an iPod.

Though pricey and sometimes confusing to navigate, the Spinn has a gorgeous design and provides excellent playback quality.

The beautiful, fashion-conscious iRiver Spinn is the upscale lounge down the street from the Slacker G2's likable-but-slightly-sketchy dive bar. What the Slacker offers in happy-hour specials (free drinks music!), the Spinn more than matches in elegance, style, and sheer sexiness. But it also has quite a bit of substance lurking beneath all that style — if you can get past the bouncers (in this case, the sometimes unintuitive controls and the high cover charge).

A monument to slick minimalism, the Spinn is a clean, beautifully designed magnesium-shelled multimedia device. About half the size of a deck of playing cards, it feels solid but isn't too heavy. Its good looks are enhanced by a stunning, 3.3-inch-diagonal AMOLED (Active Matrix Organic Light-Emitting Diode) touch screen, which displays more than 260,000 colors and induces awe in all mortals who witness its splendor.

The Spinn doesn't rely entirely on its touch screen. You can do some menu navigating with a spinning cylindrical knob, which occupies the top right corner of the gadget and ends flush with the top side of the device. A lock switch, a menu-back button, and a microphone for the Spinn's voice recorder are all situated on the top of the unit, while the power button and a volume rocker occupy its left side. The USB port (which is used for charging and for loading media) is on the bottom left side of the device, and the headphone jack is on the bottom right. Controls are easily accessible once you know where they are, and the touch screen is surprisingly smudge-resistant, too.

The array of input options is nice in some ways; I especially appreciated being able to use the Spinn's spinner to scroll through lengthy song menus. Unfortunately, knowing which input method to use at which time can be challenging. For instance, sometimes the touch screen is enabled and sometimes it isn't. Navigating backward in the menus may be activated in either of two ways: via a touch-screen Back button crammed into the top-right corner (where it is hard to press successfully), or via a physical button on the top of the device. You'll need to use the lock switch, too: Accidentally brushing against the spinner while you're listening to a song will result in unintended track-skipping. All in all, the navigation would benefit from being a bit more intuitive; it might even be improved if the spinner were the only input device.

Despite its buttons and knobs, the Spinn may be the cleanest, sleekest-looking player on the market. Viewed head-on, it resembles an all-silver, slightly smaller version of the iPhone, minus the home button. In both devices, the screen dominates the front of the case. But if anything, the Spinn refines Apple's celebrated design.

The same can't be said for the included earbuds, however. They're straight-up iPod earbud knock-offs--white, all plastic, tinny, and practically begging to be upgraded. After an initial round of listening, I switched to a set of Denon AH-C350 earbuds, and the Spinn's audio quality picked up. Bass sounded deep without distortion, and there was no sign of hiss at any audio level.

One neat in-song feature of the Spinn is that you can set A and B in and out points to create an instant loop. The Spinn also has a nice selection of EQ presets, and a five-band customizable equalizer. Another nice touch: If you're listening to a song while surfing the EQ settings, the Spinn previews each EQ selection for that song on the fly, so you can hear what each setting will sound like in the song before you select an EQ setting. Overall, based on my subjective tests, I would rate the Spinn as a great-sounding player. (At the time of this review, the PC World Test Center hadn't completed its formal lab-based audio tests for the Spinn. However, iRiver advertises the device's signal-to-noise ratio as 90 dB)

The Spinn is rated to play back approximately 25 hours of audio or 5 hours of video on a single charge. Video playback and photo viewing are outstanding thanks in large measure to the quality of the Spinn's 480-by-272-resolution screen. Colors seem to leap from the display, and video playback is smooth at 30 frames per second. The Spinn supports APE, ASF, FLAC, MP3, Ogg Vorbis, and WMA audio files; MPEG-4, WMV, and Xvid video formats; and BMP, GIF, JPEG, and PNG image files.

The player also supports a handful of subscription services and music stores, including Napster, Rhapsody, Urge, and Yahoo Music. Other features include an FM radio (with WMA recording), a voice recorder, a text reader, and support for Flash games (though I didn't try out any games beyond the two fairly lame ones preloaded on the test unit).

The included Spinn installation CD (which is small, so it won't work with slot-loading optical drives) comes with two programs for managing and transferring media to your device: iRiver Plus 3 and Windows Media Player 11. I didn't use either of these apps, opting instead to drag-and-drop files into the player. That approach worked, but my music ended up in the Files menu folder rather than in the Music folder on the player--despite the fact that I dropped the files into the Music folder. Also on the installation CD are Movie Converter (an app to convert files for playback on the Spinn), a user manual, and a firmware updater.

The Spinn is an incredibly attractive device whose saucy looks, amazing display, and high-quality audio and video playback are sure to win many admirers. A few usability and navigation issues knock it down a notch, but some of those may disappear once the learning curve is complete.