The Iomega Skin Radical definitely lives up to its namesake in the style department. Otherwise, this is a pretty run-of-the-mill portable hard drive. That said, die-hard fashionistas are hotwired to love it.

Imoega isn't particularly well known for crafting hip 'n' happening hard drives. Since its acquisition by EMC, the company has positioned itself in the SMB/SOHO markets — with predictably vanilla results. But all that is set to change with the release of the Iomega Skin Radical; a 500GB USB 2.0 hard drive that puts style and swankiness at the forefront.

Designed by sports apparel brand Skin Industries, the Iomega Skin Radical looks quite unlike any other hard drive on the market. It's almost offensively stylish, with a loud, lurid design that really kicks you in the retinas. Whether this is a good thing or not will depend on how old you are and whether you like listening to Limp Bizkit. (Personally, we think it looks obnoxious, but ageing IT journalists probably aren't the target audience.) Either way, it makes the ultra-stylish LaCie Rikki Go look understated by comparison.

In addition to the 'Radical' version we tested, Iomega offers two other designs: the 'Knock Out' and 'Red Hot'. If the cast of Jersey Shore were re-imagined as hard drives, they'd probably resemble the Iomega Skin range. This is not necessarily a bad thing. [Yes it is -- Ed.]

The Iomega Skin Radical is averagely sized for a 2.5in hard drive. Measuring 124x84x18mm, it should easily slip inside your jacket pocket (or denim hotpants, if Iomega's lifestyle shots are to be believed). For connectivity, a single USB 2.0 port is provided, which also powers the device when connected to a Mac or PC. The Iomega Skin Radical uses a standard, non-proprietry mini-USB port. However, the surrounding plastic is quite narrow, which means not all USB cables will fit. Tch.

The Iomega Skin Radical keeps preinstalled applications to a minimum, with no backup software or security tools cluttering up the drive. However, a suite of downloadable licence codes are provided in the sales package, comprising a 12-month subscription to Trend Micro Internet Security, Iomega QuikProtect and no less than three backup solutions (including 2GB per month of free online storage.) All applications and services are free, and can be downloaded from the Iomega Web site. 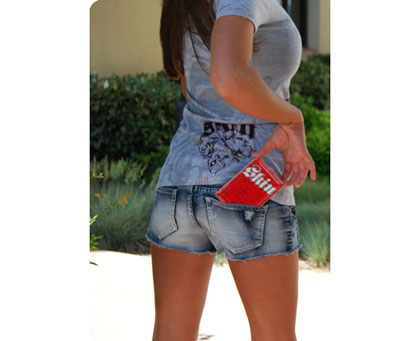 [What? Ensure this pic is removed immediately. -- Ed.]

The Iomega Skin Radical can survive falls of up to 1.3 metres, so it should cope with being knocked off your desk or table.

To test the Iomega Skin Radical's transfer speeds, we copied files back and forth between the drive and our testbed equipped with a Intel Core i7 965, 300GB Western Digital Velociraptor drive and 6GB of DDR3 RAM. We also copied the folders from one location on the Iomega Skin Radical to another, to test its speed when simultaneously reading and writing files.

The first test consisted of 3GB worth of 1MB files, which simulates installing applications and backing up system files. In the second test, we used a 20GB folder of 3-4GB files, including high-definition movies. Let's take a look at how it compared to other external hard drives on the market: