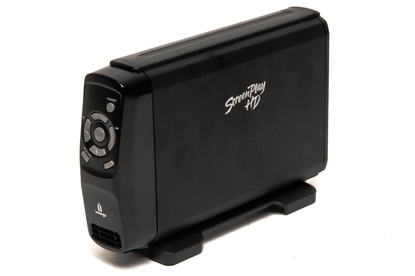 As a storage device, the ScreenPlay HD excels — it’s fast and has plenty of storage space. Its media playback abilities leave plenty to be desired, however, with limited format support and an uninspiring interface.

Iomega is a company best known for its storage solutions — capacious, speedy devices with plenty of connectivity. The ScreenPlay HD stays true to this ethos, but doesn’t back it up with much in the way of media playback support.

Maybe it’s unrealistic to expect the world from the ScreenPlay HD. The device is exceedingly simple: an externally powered hard drive case with a 500GB desktop hard drive inside and a set of A/V connectors on the back. We have seen a few systems that work well despite similar physical limitations — the most recent being Emprex’s ME1.

There are plenty of connections on the rear of the enclosure, making it easy to connect to any television from the past decade. Composite, component, SCART and HDMI connectors handle video while analog RCA and coaxial S/PDIF make audio output possible. With this repertoire the ScreenPlay HD sits ahead of its competitors, particularly thanks to the HDMI connection. This is something we’ve wanted to see on a media centre enclosure for some time, for the sheer convenience offered by a single cable.

Also of pivotal importance is the device’s USB port. At full USB 2.0 speeds it’s more than fast enough for transferring video and audio files from a PC, while the 7200RPM speed of the hard drive is able to happily keep up. We clocked the ScreenPlay HD at a transfer rate of around 40 MB/s consistently — a solid performance.

Set up is exceedingly easy — after plugging in power we opted for the HDMI connector — but the experience tumbles downhill from there.

Upon powering the device on, we were greeted with a pleasant blue screen and the ScreenPlay HD’s splash logo. We waited a few seconds, expecting the blue screen to be replaced with a flashy user interface. Instead, the blue screen remained. Instead of the slick menus we were expecting, the ScreenPlay HD makes do with a simple file-and-folder list manager. File names run off the edge screen rather than scrolling or using several lines, so if your media files have a complicated naming format you might be in a spot of bother.

Browsing through folders is okay once you master the remote control system, which has a single glaring flaw. The button in the centre of the navigation pad is “Play” rather than “OK” — so hitting it to enter a folder (which we tended to do by instinct) starts files playing.

Picture quality isn’t spectacular. The up-scaling is quite poor; videos at less than DVD quality looked blurred and washed-out at any resolution. High-definition videos displayed happily, although we couldn’t find any option to set the resolution higher than 1080i.

File support is decent but not brilliant. In terms of video, MPEG-1, MPEG-2, MPEG-4 and DivX are supported, but there’s a glaring lack of support for enthusiast formats like H.264. This is quite an omission, since the majority of downloadable content is now offered in next-generation formats rather than DivX or raw MPEG.

Photo viewing and music playback is also supported, but again is restricted to more traditional formats. JPEG, MP3, WMA and WAV are the only file types on offer here and while this should be enough for casual users, enthusiasts will be disappointed.

The ScreenPlay HD is great for storing data and the addition of limited playback support might be useful for some users. However, the price tag hike compared to a standard enclosure is difficult to justify considering the capabilities of the device.