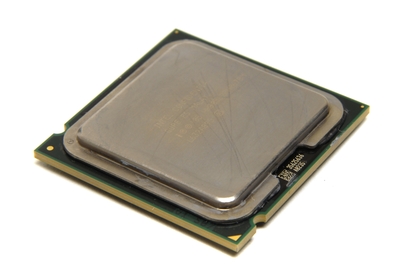 With a default speed of 2.93GHz, this is currently the fastest desktop quad-core CPU on the market. At its default speed, the QX6800 didn't perform much faster than the QX6700, but we were able to overclock it reliably up to 3.47GHz, where we observed much better gains in performance. It's definitely a high-end CPU for a professional, a gamer or an enthusiast user, and it has a high-end price tag to match.

Not content with already having the most powerful desktop CPU on the market in its Core 2 Extreme QX6700, Intel has released the QX6800, which is a quad-core CPU with a 2.93GHz clock speed. This is 333MHz faster than the QX6700 (which runs at 2.6GHz) and will suit anyone who needs more grunt for taxing applications such as video editing, encoding or image manipulation.

The Core 2 Extreme QX6800 retains the same Core 2 micro-architecture as the QX6700 and has the same amount of cache and front side bus speed (1066MHz, which is 266MHz, multiplied by the four data bits that the Core 2 can process within one clock cycle). It is essentially two dual-core Core 2 Extreme X6800 CPUs in one package and each dual-core portion of the QX6800 shares a common 4MB of cache. Thus, not all cores have access to the same areas of cache. Theoretically, this can possibly lead to latency problems, but our tests didn't show any indication of this being a problem when using common applications.

Testing with WorldBench 6 under Windows Vista Ultimate, using an ASUS P5B Premium motherboard, 1GB of 800MHz DDR2 RAM, a Western digital 500GB hard drive, an ATI Radeon HD 2900 XT graphics card and a Seasonic power supply, the QX6800 showed an overall improvement of less then five percent over the QX6700 -- 105, compared to 102 for the QX6700.

Overall, this WorldBench 6 result isn't anything to boast about, but the individual application scores within the benchmark shows good gains in the compression, encoding and rendering portions of the test. The 3ds Max 3-D rendering test, for example, was completed 25sec quicker by the QX6800, while the Windows Media Encoder 9.0 test was completed 11sec quicker. The Roxio Videowave encoder test was completed 10sec quicker and the WinZip compression test was completed eight seconds quicker. This is, of course, due to the extra speed that the QX6800 has over the QX6700. It was also a benefit in our MP3 encoding test, using iTunes, where it encoded 53min worth of WAV files to 56Kbps MP3 files one second quicker than the QX6700, and also in the Sorenson Squeeze test, where it encoded a 3min 42sec MPEG file to a Quicktime file suitable for consumption over a 512Kbps Internet connection, five seconds quicker than the QX6700.

While the performance gains aren't spectacular, like the QX6700, the QX6800 can be overclocked, which means that much greater gains can be achieved. Using a clock multiplier of 13 (which is its maximum value, the minimum value is six) and a front side bus speed of 266MHz, we tested the QX6800 reliably at 3.47GHz. Our iTunes MP3 encoding test showed a marked improvement at this speed -- it competed the test in just 36sec; the default 2.93GHz speed took 43sec. The Sorenson Squeeze test finished in just 46sec at the 3.47GHz speed, which is an improvement of five seconds over the 2.93GHz default speed (51sec).

We did notice the noise level increase on our standard CPU cooler when testing the QX6800. Using the dynamic fan control on the ASUS motherboard, the idle speed and the workload speed of the fan was much higher than what were used to hearing from our standard Intel CPU cooler when using the QX6700 CPU, and, naturally, the noise level increased when we overclocked it to 3.47GHz.

The QX6800 will work on all current motherboards that support Core 2 Extreme CPUs and this means all motherboards with P965, G965 and Q965 chipsets. Motherboards older than this, such as ones that use an Intel 945P chipset, may not be able to run the QX6800. However, a consultation of the motherboard vendors' Web site needs to be undertaken to confirm this.