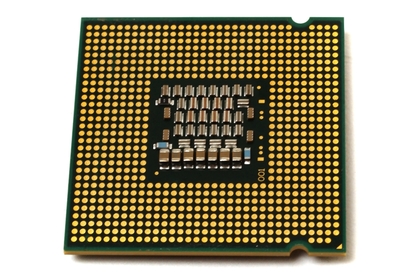 Core 2 Extreme CPUs are aimed at the high-end of the personal computing market. They are a suitable fit for expensive gaming PCs and are great for video editing rigs and for those of you who use design applications and want to build an entry-level workstation, rather than a more expensive one based on Intel Xeon CPUs.

The Core 2 Extreme QX6700 is CPU that boasts four cores instead of two. On the inside, it's actually made up of two separate Core 2 Duo dual core CPUs, which Intel has put into the same single-socket CPU package. Each dual core portion of the QX6700 has a shared 4MB cache, and each core runs at 2.66GHz (think of this CPU as being two Core 2 Duo E6700 CPUs in one package).

It wasn't the blazing performer we expected it to be in our tests, mainly because our test software was unable to utilise all of the cores to process a single function. Cdex, for example, only used up 25 percent of the CPU while Sorenson Squeeze 4.5 used up around 48 percent, and peaked at 63 percent. Cucusoft's iPod Video Converter Suite was able to use 52 percent of the CPU.

The QX6700 completed all our tests in a similar time to the Core 2 Duo E6700, which is not surprising as the E6700 is also a 2.66GHz CPU. Where the QX6700 offers an advantage is in situations where multiple jobs need to be worked on concurrently. Sorenson Squeeze was able to complete our test in 2689 seconds while another instance of Sorenson Squeeze was running another task at the same time. Both instances used around 49 percent of the CPU for their respective tasks. Using the QX6700 in this way can save you plenty of time. If you regularly need to encode multiple videos (you can run up to four tasks at once on this CPU without a problem), or if your software can take advantage of more than two CPU cores at a time, then a quad-core CPU is a wise investment. It would be the equivalent of having two dual-core PCs to crunch your workload, but you won't need to spend extra money on a secondary PC and monitor setup.

If you want raw speed, rather than the ability to run four simultaneous tasks at full speed, then the X6800 is a better proposition. Like the Core 2 Duo CPUs, this processor has a 4MB cache that is shared between the two cores, but each core's frequency is higher - 2.93GHz. The extra speed translated to faster times in some tests. In the Cucusoft test we recorded a one second decrease in speed over the E6700, but in the Cdex MP3 encoding test it was faster than the E6700 by one second. It recorded a 93 second improvement in Sorenson Squeeze, with the program using up to 97 percent of the CPU.