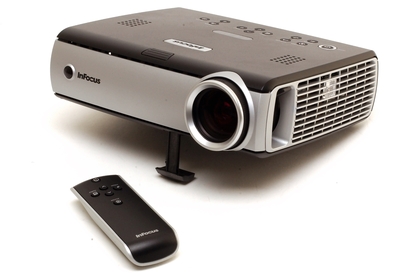 If you are only planning to use it to office presentations, the InFocus Work Big IN32 may suffice but keep in mind that the colours it produces are not accurate.

The InFocus Work Big IN34 is a DLP business projector with a native resolution of 1024 x 768. Designed primarily for business presentations, the IN34 is compact, lightweight and easy to set up. Unfortunately, our testing revealed some problems with colour and an over-abundance of white in the image. This results in a glary picture, with poor subtly in shades of colour, a general lack of contrast and washed out black levels.

We tested the IN34 by connecting it to our test PC at the native resolution of 1024 x 768. On default settings the desktop image, while crisp and easy to read, was overpowered by white and severely discoloured. Desktop icons which were supposed to be orange appeared almost brown and the forest green Windows start bar looked citrus green.

Using the on-screen calibration tools we attempted to correct the colour issues but were unsuccessful. Each image preset mode had its own share of problems and for each problem we corrected, another would arise. The best mode we found was the film mode which was fairly accurate in its colour reproduction, however, in this mode the image was too dark, slightly lacking in contrast and the greens were still over-saturated. We were impressed that the IN34 has RGB colour control, but reducing the amount of green in the image, even slightly, resulted in inaccuracies in the other colours.

We ran DisplayMate Video Edition and, apart from the aforementioned colour issues, we found very few problems. There was some slight banding in the some of the moire resolution patterns but the rest of the tests were handled rather well. There was no image noise and the patterns were all rendered without fault. The only thing that lets this projector down is its ability to reproduce colour and the overbearing whites. If it wasn't for that, the image quality would be quite impressive.

While this is a business projector, it still somewhat caters for home theatre usage via S-Video and composite. To test the video playback, we connected a DVD player via composite video and ran our test DVD of The Matrix. Since this is a 4:3 business projector, the video was displayed in letterbox format. As seen on the PC tests, the image quality was quite good but hampered by the same colour problems.

The IN34 has two speakers built-in to the chassis supported by a 3.5mm audio jack. The quality of the speakers is suitable for business presentations but they lack bass and a large portion of the mid-tones and high treble registers are quite muted or lost. These speakers are not recommended for watching movies but will be sufficient for sound in boardroom presentations where high quality audio is not an important factor.

The design of the unit is quite attractive for a projector targeted at the business sector. Business projectors tend to be quite conservative but this unit avoids using harsh edges in favour of curves and rounded corners. The rear panel has two PC connections, one DVI and one VGA D-Sub, as well as composite video and S-video inputs as well. There is also a serial connection and a monitor out so you can pass through the signal to an external monitor. In addition to the 3.5mm audio input there is also a similar audio out plug should you wish to connect external speakers. Even though the unit ships with a user-friendly remote control, running along the top it has volume controls as well as keystone correction buttons and regular menu navigation keys. Both the left and right sides of the IN34 have heat vents which release hot hair away from the lamp. The front of the unit is dominated by the lens which has a focus ring and a zoom slider.

Unlike the InFocus Work Big IN32 the IN34 is not a highly recommended product. It projects well enough but there are plenty of other units on the market that can do it better and for a similar price. If you are only planning to use it for office presentations (spreadsheets and the like) then it may just suit your needs