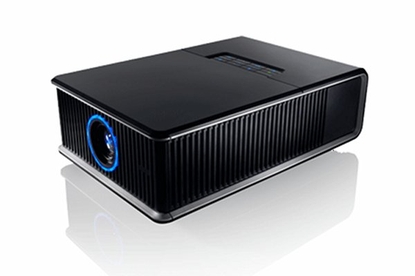 The InFocus ScreenPlay SP8602 is a home theatre projector with great colour reproduction abilities. It is designed for long-term installation and its lamp life is shorter than we'd hope for, but for outright image quality it's among the best we've seen.

InFocus' ScreenPlay SP8602 home theatre projector is a 1080p Full HD installation model with 1300 lumens and a 30,000:1 contrast ratio. Its mediocre specifications belie its all-round excellent video performance, with incredible levels of detail and seamless, smooth colour gradation in even the most demanding Blu-ray video.

The InFocus ScreenPlay SP8602 is certainly not a portable projector — at 54cm long and 36cm wide it's made for serious home theatre room installations. The InFocus IN5504, which is designed for universities and other educational institutions, has a near-identical design. The same chassis layout and the same blue-ringed motif on the centre-mounted lens mean the InFocus ScreenPlay SP8602 is a modern-looking projector that would be well suited to a stylish home cinema.

The projector has plenty of digital and analog video inputs on its rear panel — we used HDMI and a Samsung BD-P3600 Blu-ray disc player for most of our testing, but composite, VGA and component video connectors are also available. You won't be short of inputs if you have multiple devices to connect, and thankfully the rear of the ScreenPlay SP8602 has notches for proper cable management.

We projected an image onto a portable screen and were initially struck by the wonderfully smooth and film-like colour reproduction of the InFocus ScreenPlay SP8602. A 1080p copy of King Kong showed impressive film-like colour tones with no banding or loss of colour information. When switching to more vibrant and brightly coloured content like Speed Racer the ScreenPlay SP8602 still acquitted itself admirably, with no evidence of oversaturation in its Cinema preset mode.

Being a 1080p projector the InFocus ScreenPlay SP8602 is able to display a great deal of fine image detail — lines are clean and smooth in animated material and skin detail is great in live action footage. It took a little while for us to achieve maximum sharpness out of the projector's lens: because the ScreenPlay SP8602 has manual focus and zoom dials, it took us a few trips between the projector and the screen to find the perfect focal point. Using the manual horizontal and vertical lens shift dials also changes the focal plane, so ensure you have the projector correctly positioned before finetuning.

If we hadn't read the projector's specification sheet before testing, we would have guessed the InFocus ScreenPlay SP8602's contrast ratio was higher than 30,000:1. In all but the most demanding scenes it performs very well with almost no black crush or loss of bright white detail. We were obliged to run the projector through a barrage of Dark Knight tests using the difficult to display opening scenes, which have pin-pricks of bright white light on a dark background. While the projector wasn't able to show entirely clean whites while maintaining an inky level of blackness, the film-like toning meant that the projected image was still pleasant to watch.

Fan noise isn't too bad during normal operation at 28 decibels, and the timbre of the fan's expelled air is low and unobtrusive. We opted to run the projector in Eco mode when in a dark environment, since it improves fan noise and prolongs lamp life at the cost of a few hundred lumens' brightness. Otherwise lamp life is an uninspiring 2000 hours. Thankfully InFocus' fantastic five-year standard warranty should take care of any other problems you might experience.