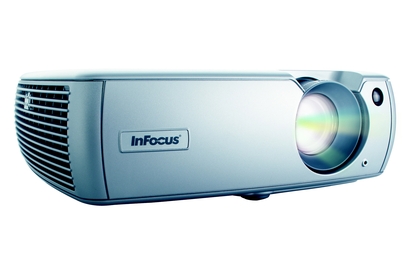 The Screenplay 5000 is a fine projector in spite of a handful of niggling foibles. Worth a look.

The ScreenPlay 5000 home theatre projector from InFocus is unusual in that it uses an LCD projection system instead of the more common and newer DLP technology.

There are connection options to cover all bases including DVI, component, S-Video and composite plus 12V triggers for activating things such as curtains or rollup screens. The ScreenPlay's native resolution is a 16:9 aspect 1280 x 720, so things look nice and sharp if you're using component or DVI inputs. We found that S-Video was, quite frankly, lacking in the detail department and our image tended to look pixelated and messy from a normal viewing distance. We'd recommend you do the ScreenPlay 5000 justice by plugging in using component leads or a DVI cable to get optimal picture quality.

We threw some of the new Windows Media Video HD content at it using the supplied DVI cable on a high-spec PC. The high-definition video looked glorious and the ScreenPlay 5000 was finally showing what it was really capable of.

Detail was excellent and all the messy pixelation of the S-Video cable-powered DVD session was gone, while colours--particularly skin tones--were warm and accurate.

In terms of features, there's plenty to like about the 5000, including an easy-to-use menu system that can be operated using either the buttons atop the projector or the remote control. Sadly, there is no lens shift mechanism to make physical adjustments to the projector's alignment; there's only the standard single adjustable foot at the rear of the projector.