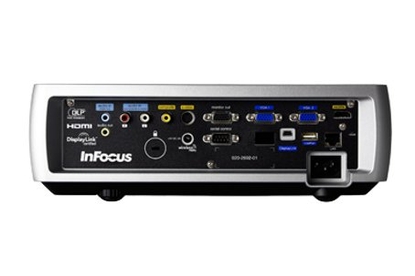 InFocus' IN3902 education projector offers some innovative and very useful advancements to the digital whiteboard market. Utilising a combination of digital projector and wireless wand, users can interact with on-screen items very easily. The entire package only requires a simple USB connection to a PC -- it's simple to set up and operate, and it's a feature not offered by other education and installation projectors.

The InFocus IN3902 is a projector with a 1024x768 resolution, 2000:1 contrast ratio and 3000 lumen brightness rating. It's designed for educational institutions, and its specifications make it suited to presentations in a brightly lit, medium-sized classroom. The inclusion of integrated wireless pen functionality could prove to be a boon for presenters.

InFocus' IN3902 hasn't undergone the same chassis update that 2010 series InFocus projectors such as the IN3114 have. It has a similar design to the IN3108 and similar vintage models, and while it's unimposing and certainly not ugly, it feels slightly dated next to recent projectors. Two VGA, a single HDMI, composite and S-Video ports allow regular video devices to be connected, but to use the InFocus IN3902's LiteBoard capability you'll need to connect a PC via USB with the supplied DisplayLink cable.

We set up the InFocus IN3902 in a medium-sized room (roughly the same size as we remember a school classroom to be, sans desks and shouting students) and found the projection image didn't display any flaws or performance issues. Brightness levels in a room with fluorescent lighting were acceptable, although we wouldn't complain if the projector had an extra few hundred lumens under its belt. Colour performance is acceptable, and although the IN3902 doesn't have the same gradation smoothness or near-perfect rendition of a more colour-sensitive projector it displays no significant bias to red, green or blue. Sharpness is excellent from corner to corner, with individual pixels easily resolved and no loss of clarity at any point on the projection surface.

The most interesting aspect of the InFocus IN3902 is its bundled LiteBoard interactive wand system. Utilising a pen that looks like a cross between a wireless presenter mouse and an ear thermometer, the system works by tracking the movements of the pen on the projection screen. It can be used to write and draw on a digital screen, with all the advantages that offers over old-fashioned chalk. A pressure-sensitive tip and right- and left-click buttons allow regular PC functionality while a dedicated button changes from drawing to writing modes. We tested the system by drawing simple shapes, writing cursive sentences and doing some tough long division — everything we sincerely hope schools are still teaching — and found that the pen did not display problematic amounts of lag or inaccuracy. If the tip of the LiteBoard marker is covered (by your arm, or by someone walking through the projector's light beam) connection is broken and input is lost. With a little bit of effort we quickly became familiar with the intricacies of the system and overcame what proved to be a minor flaw. If the projector is ceiling mounted in a permanent installation, the issue of accidental interruptions by moving students would be significantly lessened.

The InFocus IN3902 has an average 3000 hours of lamp life. If possible we'd drop the brightness settings to wring an extra thousand hours of life out. Fan noise is not significantly worse than other mid-brightness projectors we've tested, and heat output was bearable when sitting more than a metre away from the projector's side.

InFocus's IN3902 is a competent installation projector for medium-sized rooms, and the inclusion of a novel (and useful) digital whiteboard replacement gives it additional use for the education market.