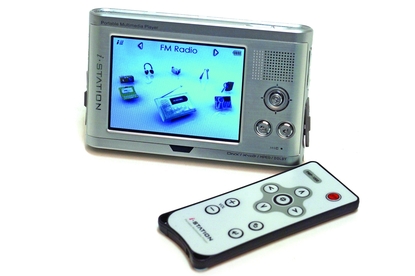 The i-Station PMP1000 is a reasonably priced multimedia player with a handy touch screen.

Portable media players let you stow in your pocket favourite TV shows, movies, music and photos--a mix of entertainment otherwise confined to your desktop computer. Although Microsoft is pushing players based on the mobile version of its Media Center software, there are a variety of alternatives available, each with a different take on the concept--from physical design to user interface.

Most media players have had similar drawbacks: high price tags, barely pocketable sizes, and minimal extra features. However, the i-Station PMP1000 and Archos PMA430 introduced a new touch, quite literally, as they were the first to include a 3.5" touch screen display. This is a boon for ease of use. The i-Station is well built and a tad smaller than some earlier players. The PMP1000 is equipped with a 20GB hard disks; enough capacity for roughly 4500 songs or roughly seven movies. It has a USB 2.0 interface, can also double as an external hard disk and includes internal directory structures for organising your media files (see specifications for full listing of supported photo, music and movie file formats).

The devices can record input from built-in microphones and line-input directly to MP3. The i-Station PMP1000 can also output to TV (S-Video) but not record. Its extra features include FM radio tuning and recording plus built-in dictionary, calendar, calculator and a text viewer.