Although it was overshadowed by contemporary Nintendo and Sega consoles of the day, the TurboGrafx-16 nevertheless carved out a small place for itself in the hearts of hardcore gaming eclectics. Now it's back in emulated form on iOS. Can the TG-16 still deliver fun two decades later? 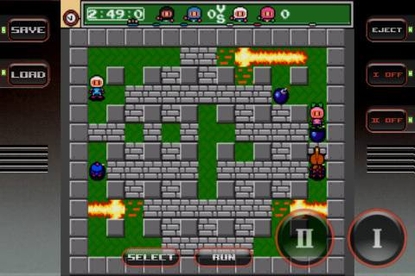 If you're a fan of the old TurboGrafx-16 console, then this iPhone/iPad app will provide some highly enjoyable mobile classic gaming.

As its name suggests, the GameBox is the official emulator of the old late 1980's, advanced-for-its-time NEC TurboGrafx-16 games console, which was also known as the PC Engine in Japan and Europe. The App is a free download, but if you want to play any of the 16 currently available, faithfully emulated Turbografx games, you'll have to fork over $3.99 for each one.

The App's roster of games is varied, and includes some stone cold, tried-and-tested arcade classics. Top picks are three superb side scrolling shoot 'em ups, Gradius, Salamander and R-Type. There's also a trio of old-school beat 'em ups, the highly enjoyable Vigilante, the pretty decent Ninja Spirit, and the comically wobbly China Warrior. Bonk's Adventure and New Adventure Island both deliver classic platform fun, and Bomberman '94 continues to provide very entertaining arcade action even after all these years thanks to its timeless gameplay. World Sports Competition and World Class Baseball are both okay, and Military Madness, Jaseiken Necromancer, Soldier Blade, and Dungeon Explorer are trips down memory lane probably best left to those who enjoyed them the first time around. Oh, there's also Victory Run for those who want to re-experience the thrills and spills of a sprite-based racing game. And if you don't know what that is, you probably won't like it.

One of my beefs with this emulator is that there are no differences between the iPhone and iPad versions. Considering how simple it is, couldn't Hudson have spent a little extra time putting together some iPad-specific screens so that the App didn't run pixel-doubled on the iPad, as it currently does? The iPhone version looks great though.

However, the emulation is excellent, and each game is faithfully recreated in all its past glory. Control options are good, and ensure that even the fiddly shoot 'em ups are reasonably playable. Some of the games are great, particularly R-Type, Bomberman and Vigilante, and overall the game selection is strong. More are apparently on their way, and purchasers who make requests will allegedly be listened to. Devil Crush, Blazing Lazers (Gunhed), Rainbow Island, New Zealand Story and Galaga 90 please!

The per game cost of $3.99 per game seems a little pricey, particularly if you want to buy a bunch of them. Some bundle discounts would be appreciated. It would also be nice to have iPad-specific screens, rather than pixel-doubled screens from the iPhone version.