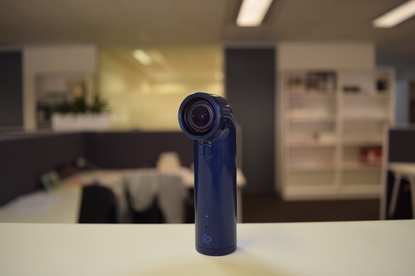 Innovative HTC has made a point of focussing on photography with its range of smartphones. Over the years, the Taiwanese company has introduced smartphone cameras that take 3D photos, work well in low-light situations, and can even change the point of focus after a photo has been taken. Now HTC has taken another bold step with an innovative digital camera called simply ‘Re’.

Why is it needed?

Ever gone to a concert and noticed everyone is watching The Killers or whoever through the screen of their smartphone? It seems people want to hold onto their memories so desperately that they’re willing to not be present.

HTC’s latest camera is born from this dilemma. It audaciously ditches the viewfinder in a move that forces you to savour the moment. Ultimately a great deal of trust is placed in the Re to ensure sacred and temporal moments are preserved in a photo.

Making sure these moments are recorded is a purpose-built 146-degree wide angle lens. Simply point the camera in the general direction and photos will be taken at 16-megapixels by a CMOS sensor from HTC’s smartphone rival Sony.

The camera’s design is radical in its minimalism. It’s cylindrical for starters, with the lens peering over at ninety degrees for a camera that resembles a submarine’s periscope. You hold it in the same way you hold a pistol.

A large, chrome button rests beneath your thumb; a single press takes a photo, while a longer one starts video recording. A second button — positioned under your forefinger — switches the camera to slow-motion recording. These are the only buttons on the entire camera.

There isn’t even a power button. Grip sensors built into the camera recognise when it is being held and automatically switch it on.

This atypical camera design is waterproof to a metre for thirty minutes, but it can be increased with the aid of a simple screw cap to three metres for two hours.

Tweaking the Re camera’s settings is a matter of downloading the complementary smartphone app. The camera, although an HTC product, will work with both Google and Apple’s mobile platforms. It will sync with smartphones running Android 4.3 or iOS 7 and above.

Re: there's an app for that

The application is the second-act in the Re’s two-part plan. It connects to your smartphone via Bluetooth and transfers photos on the fly by using Wi-Fi direct. The screen on your smartphone can be used by the Re as a live viewfinder. And software updates are downloaded by your smartphone before being transferred to the camera. (HTC pushed out three updates during our six weeks review period — and that’s a good indication of the company’s ongoing investment.)

The application makes it hard to pick the Re camera as a first-generation product. It is well designed and easy to use. It stocks granular settings and yet never feels cluttered or overwhelming.

The time-lapse mode is initiated from the app and it allows you to choose the frequency and duration in which photos are taken — but it goes one further by calculating how long the time-lapse video will be based on the configuration. We left our Re on the windows sill for eighty minutes, walked away from the desk, which caused our smartphone to disconnect from it, and returned to the following time-lapse video.

Read more HTC's Re lifestyle camera goes on sale for $249

Good Gear Guide tested the Re with three smartphones: a Sony Xperia Z3 Compact, an Apple iPhone 6 and a Motorola Nexus 6. We found on a few occasions that we needed to restart our smartphone for it to connect with the Re camera. This is our only gripe with the application and we hope HTC will continue refining the pairing process over time.

Our big test of the Re came on the 31 December, 2014. Using the camera to record an Above and Beyond concert on New Year’s Eve proved an ideal testing ground. The occasion had weight, the complex lighting would prove challenging and, most importantly, it would help identify if the design of the Re camera was less distracting than a run-of-the-mill compact camera.

Throughout the night we raised our hand and without thought pressed the camera button. Taking a photo without thinking took some getting used to, but eventually we gave into the practice and found the design of the Re did free us up to enjoy more of the experience.

The custom lens is so wide that photos will have a curvature to them — similar to those found on some panoramic photos. Choosing to eliminate this effect is easily done in the application; however, the photos will be straightened out by being cropped.

Crammed in a concert hall with 5000 other people, we found the wide angle lens captured the electric atmosphere, particularly in the very wide shots taken far from the stage. The Re camera takes a second to boot when first gripped and often the first shot immediately taken was out of focus. Anyone taking this camera to a concert should take two shots in succession with the second one turning out fine. We suspect the first shot would’ve too if we weren’t jumping as much — but jumping at a concept is what the Re camera is about.

Photos taken close to the stage varied in success. We were two people from the front and the bright lights would flush the detail from parts of a photo. All of the photos taken at the concert were characterised by image noise and a few were blemished. This is not uncommon to any camera priced at $249.

Video performance is the Re’s strong point. The camera dynamically responds to changing conditions and the audio track eliminates the low-end bass so that the sound accompanying videos is clear.

Intermittent use of the Re throughout the night, where we alternated between video and audio, caused the battery to die after 2 hours and 50 minutes. Improved battery performance would be a welcomed addition in a second-gen iteration.

Photos taken under ideal, natural lighting were of decent quality, with well articulated colours and blacks that are detailed. We didn’t test the camera as thoroughly during the daytime or in water, but the HTC-built cam showed promise.

HTC’s Re is based on a great idea: a camera for the everyman that chronicles important moments while you live them. The radical design is one we value and its accompanying application is near perfect.

We’re not going to say the Re camera will catch all of your sacred moments, because it won’t. It will catch the vast majority of them and it’ll do so without splitting your attention between the process of taking a photo and the present.

The Re then is like any first-generation product in that a few minor gripes undermine the experience. The autofocus takes more time than it should and it would benefit from a larger battery. Though somewhere in that strange and charming camera is the potential for a wonderful product.