If you can live without a hardware keyboard, the HTC Droid Eris is an affordable and feature-packed alternative to the Motorola Droid 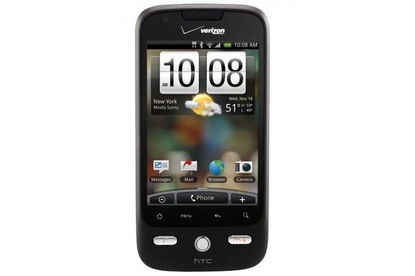 If you can live without a hardware keyboard, the HTC Droid Eris is an affordable and feature-packed alternative to the Motorola Droid.

We're yet to get our hands on the HTC Droid Eris smartphone, but here are the impressions of our North American colleagues.

The HTC Droid Eris marks the second in Verizon Wireless's parade of the Droids. Also due this week from Verizon, the Droid Eris shares the Droid moniker and many features of competing Android phones, but it also adds some touches that improve the experience for business users.

The Droid Eris touchscreen handset (a CDMA version of the HTC Hero) has dimensions similar to, and much of the same functionality as, the T-Mobile myTouch 3G GSM unit, also made by HTC. Side by side, the first thing that jumps out is the Eris's brighter, sharper-looking display. While both handsets have a 3.2-inch, 480-by-320 pixel screen, the Droid Eris supports 262,000 colors while the myTouch 3G has just 65,000 colours.

Unlike the myTouch 3G, which has six hardware keys on the front plus a roller mouse button, the Eris replaces the top four buttons (Home, Menu, Back, and Search) with embedded softkeys. In practice, the four software keys were usable, but not as easy to activate as their hardware counterparts. I've found the myTouch 3G's real Send and End buttons and roller mouse (which glows if you have an incoming text message or other notification) more useful than the Droid Eris's softkeys when fumbling around in the dark. (The Motorola Droid lacks any front-panel hardware buttons.)

The Droid Eris has a 528MHz Qualcomm MSM 7600 CPU, while the myTouch 3G has a 528MHz Qualcomm MSM 7201A chip. The Eris has a 5.0-megapixel camera (up from a 3.2-megapixel camera), Wi-Fi, and Bluetooth 2.0; includes a GPS receiver; and supports the 800MHz and 1900MHz bands on the Verizon Wireless network. It also has a standard headset jack, something the myTouch 3G lacks.

Under the hood is the Android 1.5 operating system, not the Android 1.6 (Donut) update or Android 2.0 (on the Motorola Droid). (T-Mobile has already pushed out the Donut update to its G1 and myTouch 3G customers.) However, some of the improvements tossed in with Donut are in the Eris anyway. For example, the updated Google Maps application, which includes transit directions, comes with the phone; and the video and still cameras are accessible through the same interface, as is the case with Android 1.6. Not present here is the Google Maps Navigation turn-by-turn application that comes with Android 2.0.

Android Marketplace, from which you can find hundreds of independently developed applications for the phone, uses the Android 1.5 version in the Droid Eris. This version unfortunately doesn't support thumbnail images of the apps. A Verizon Wireless spokesman says the Droid Eris phone will be receiving Android updates at some point in the future.

What sets the Droid Eris apart is how it caters to business users. For example, it allows direct calendar and contact synchronisation with Microsoft Outlook. This means that, unlike Google-branded Android phones, you don't have to sync your data with your online Google account first before downloading it to the phone--a boon for users. Also, Verizon has preinstalled an Adobe PDF file viewer, a link to Verizon's Visual Voicemail, a "Stocks" link to financial market information from Yahoo Finance, and support for Microsoft Exchange corporate e-mail.

Also preinstalled: A Peep application for Twitter and Footprint, which allows you to capture an image, attach comments, and use the phone's GPS capabilities to log its location and create a map, all of which can be shared.

While the unit can't match the Motorola Droid's 420-by-854-pixel display, the HTC Droid Eris performed well with standard and high-definition YouTube videos, depending on the quality of the data connection.

The 5-megapixel camera lacks a flash but performed adequately, capturing reasonable images under adequate ambient light. The virtual keyboard, which offers haptic feedback if desired, worked well in portrait or landscape mode. At just 4.2 ounces and measuring 4.5-by-2.2-by-0.5-inches, the unit fits comfortably in a shirt pocket.

If you want a cheaper Android-based alternative to the Droid and can live without a hardware keyboard, the Droid Eris is a good choice at $US100.