The HTC Desire Z is an excellent smartphone, mainly due to a combination of Google's excellent Android platform and HTC's Sense UI. However, its biggest selling point -- the "pop-out" physical QWERTY keyboard -- has a poorly designed hinge mechanism that detracts from the handset's overall appeal.

The HTC Desire Z comes with the 2.2 or "Froyo" version of the Google Android platform. This adds full Flash support, built-in wireless tethering, and the ability to store supported third-party apps on your SD card. Froyo also delivers a range of other improvements, mostly centred on speed and performance. The Desire Z runs an 800MHz processor; slightly below the benchmark 1GHz processors used in other Android phones like the Desire HD, the Motorola Milestone 2 and the Samsung Galaxy S. Thankfully, we didn't experience any hint of slowdown or lag during general use.

The Desire Z also comes with the latest version of HTC's Sense UI. Sense now offers "skins" that change the look of windows and the dock, and other features include an "HTC Likes" widget for recommended app downloads, the "My Shelf" app for storing and reading e-books, a universal search function, a unified messaging inbox, and instant maps through the "Locations" app, which doesn't require network coverage once downloaded. A range of maps can be downloaded and stored on the SD card; the Australian map is a 345MB download that will work without the need to access mobile data. Browsing the map isn't technically "instant" as HTC claims it is, but it is noticeably speedier than using your data connection with Google Maps. We also love the fact that your eight most recently opened applications appear at the top of the notifications panel in a horizontal scroll bar.

The HTC Desire Z's Web browser benefits from Froyo: it's one of the best mobile browsers we've used. It supports Flash video, and multitouch zooming, while it loads and renders pages quickly and smoothly. The Desire Z also handles media efficiently; we loaded a 720p AVI file onto our microSD card, and played back the file through the standard video player without any issues. 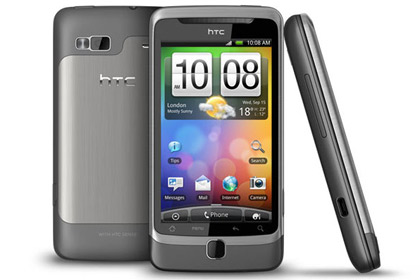 The HTC Desire Z may not have a massive screen like the Desire HD, but the inclusion of the keyboard means it is a much thicker handset

The HTC Desire Z benefits from a quick boot up-time (claimed to be 10 seconds) and DLNA support for connection to compatible televisions. We found the start-up time to be just over 10 seconds in most instances, which is a vast improvement on most other Android devices, as well as the iPhone 4. HTC has also thrown in some small but very nifty touches; the Desire Z can be set to reduce its ringtone when it detects movement (i.e. when you pick it up), it can mute the ringtone if the phone is flipped over face down, it will ring louder when it senses it is in a pocket or a handbag, and it will activate the hands-free speakerphone while on a call if the phone is flipped over face down.

The Desire Z also works with HTCSense.com, a set of desktop-based services largely centred on backup and security. Once you've created an account and logged in, you can locate your phone on a map if it is stolen, remotely lock or wipe the handset, re-direct calls and messages to an alternative phone number and archive contacts, text messages and call history — all through your PC. You can also access the Android market from HTCSense.com, including a list of third-party applications recommended by HTC.

The HTC Desire Z has a 5-megapixel camera with a single LED flash, and it doubles as a 720p HD video recorder. The flash works reasonably well in dim lighting, and video recording is relatively easy to keep steady and of a good quality. The camera has a wealth of settings, including image effects like solarise and sepia, along with the ability to adjust ISO, sharpness, saturation, contrast and exposure.

The HTC Desire HD was let down by its battery life, so we are pleased to report that although it's not stellar, the battery life of the Desire Z is a little more pleasing. It generally managed to last a full day in testing, though you will obviously get more use by fine tuning the synchronisation settings; e-mail, Facebook and Twitter regularly access the Internet in the background to deliver live updates. To enhance battery life, we recommend downloading a task manager app from the Android Market; this will allow you to close applications that might be running in the background and sucking up valuable battery juice without your knowledge.

The HTC Desire Z is sold exclusively through Vodafone in Australia, but can also be bought outright and unlocked through online store MobiCity.