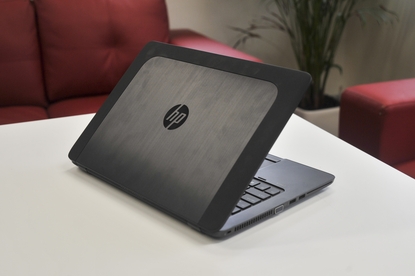 HP's ZBook 14 is an Ultrabook that's also a mobile workstation. It weighs just under 2kg, yet it offers processing power that can be used to run design and modelling applications such as 3ds Max. Basically, it's the type of Ultrabook to go for if you want something mobile that will also help you get your work done while on the road. It's strong and has plenty of useful ports, but its keyboard could be a little better.

For demanding users, a regular laptop won’t cut it. Instead, a mobile workstation is needed; a laptop with a stronger-than-normal spec that’s capable of delivering quicker processing times and better reliability for heavy workloads, be they video editing, animation or design loads. HP’s ZBook 14 is one such mobile workstation, but you would barely know that just by glancing at it, mainly because it’s also classed as an Ultrabook.

The ZBook 14 is a 14in model that has a usual notebook design, and HP claims that it’s the world’s first mobile workstation to carry Ultrabook signage. Its profile thickness is on the limits of what the Ultrabook specification allows, and it houses a slew of ports and slots that are rarely represented on more mainstream Ultrabooks. Apart from four USB 3.0 ports, the ZBook 14 supplies a full-sized DisplayPort, built-in Gigabit Ethernet, a VGA port, and an SD card slot. A facility is present on the right side that can be used for a docking port, security is handled by a Smart Card slot and a fingerprint reader, and there is an interface at the bottom that allows a second battery to be added.

On the inside, the ZBook 14 is driven by an Intel Core i7-4600U CPU, which is an energy-efficient model that runs at 2.1GHz and has two cores plus Hyper-Threading. It’s surrounded by 16GB of low-voltage RAM (1600MHz), an AMD FirePro M4100 FireGL V graphics adapter (though it can also use the Intel HD4400 graphics in the processor to save power), and a 240GB solid state drive (an Intel SSD 520 Series). The 4600U CPU is the fastest one available in the ZBook 14 range, and the 16GB of RAM is the most that can be installed via its two memory slots. Storage goes up to a 512GB SSD, though there are also hard drive options for 5200rpm (up to 1TB) and 7200rpm (up to 750GB).

In our benchmarks, the ZBook 14 posted results we expected: 39sec in Blender 3D, and just under 20min (19min 45sec) in HandBrake (where we turn a VOB file into an MP4). It’s also a swift machine when it comes to tasks that are typically associated with the office, be it creating presentations, working on spreadsheets, and, of course, multitasking. However, we experienced some slight delays when moving the cursor, which perhaps had something to do with the background software or the drive encryption that we enabled. That said, it wasn't always noticeable and had completely gone by the end of our review.

The workstation-class graphics are part of the overall good performance of the ZBook (they recorded 5340 in 3DMark’s mid-range Cloud Gate test), and the solid state drive put up read and write rates of 400 megabytes per second (MBps) and 250.9MBps, respectively, in the CrystalDiskMark benchmark. We’ve seen faster SSDs in more mainstream Ultrabooks (the ASUS Zenbook UX301 even has a RAID 0 array in it), but these results are still very good.

Where the ZBook 14 offers more than a regular Ultrabook is in its ability to off-load some processing tasks to the AMD graphics processor when running design and engineering applications. You should mainly consider buying this laptop if you run those types of applications (such as 3ds Max).

All of these features are packed into a magnesium alloy chassis with aluminium cladding that HP claims has passed MIL-STD-810 tests for drops, vibration, shock, dust, humidity, altitude, and temperature variations. The lid has a rubber lining around the bezel that forms a seal between the screen and the chassis when it’s closed. The lid has excellent strength and protects the screen very well. Even when exerting pressure from the sides towards the middle of the lid (in other words, bending the lid), the LCD panel didn’t show any puddling.

At 1.8kg, it’s a hefty unit, and its build quality feels solid all over — though we did sometimes hear some rattling and creaking when we typed. We put these noises down to the bottom panel, which is removable, rather than fixed in place like it would be on a mainstream Ultrabook. This is a lightweight metal panel that can be taken off simply by moving the locking mechanism to the unlock position and sliding the panel forwards. This ends up giving you easy access to two SO-DIMM slots, an mSATA SSD slot, a single SATA drive bay, and Wi-Fi and broadband modules. The battery can also be removed, which makes it possible to carry spares with you.

Carrying a spare might be a good idea since the ZBook 14 only lasted 3hr 39min in our rundown test. In this test, we disable power management, enable Wi-Fi, maximise brightness, and loop a video until the battery is fully drained. You can extend this time a little if you turn down the brightness and don’t run too many CPU-hungry tasks. Furthermore, you can add a battery slice to the underside of the unit — a 6-cell Long Life (60 Watt-hour) battery slice is an option. This gives the ZBook 14 good versatility for field work, even though it adds to the bulk of the notebook.

Security and other features

Security is aided by the fingerprint reader that resides on the right side, and this can be managed through the installed HP Client Security software. Apart from controlling Windows login (our test model came with Windows 7), it allows you to encrypt your system drive, and also to enable JITA (just in time authentication) on removable drives — this means you have to swipe your finger (or enter your password) every time a drive is plugged in to a USB port. A Smart Card slot resides on the left side of the chassis, there is a Trusted Platform Module (TPM 1.2), and you get a customary cable lock facility.

Other features include a webcam, dual-band Wi-Fi (802.11ac via an Intel Wireless-AC 7260 module), Bluetooth 4.0, and a SIM card slot that can only be accessed when the battery is removed. There are dedicated buttons just above the keyboard for toggling Wi-Fi and volume. There is one fan that pushes air through the fins of the heat sink that resides on the left side, and there are some air vents on the bottom. The unit tends to get a little warm after prolonged use; don’t perform CPU-intensive tasks while resting it in your lap.

In terms of user comfort, the ZBook 14 features a 14in screen with a 1920x1080-pixel resolution, and it has a matte finish that won’t reflect light sources. It looks crisp and vibrant, and has plenty of brightness. Furthermore, it has wide viewing angles; you won’t have to tilt and turn in order to view images and videos with proper contrast.

For typing, there is a spill-resistant, backlit keyboard with Chiclet keys that are full sized and which feel soft when hit. If we were the type to nitpick (and we are), we could say that the keys feel a little shallow considering how thick the chassis is; for reference, they are not as shallow as the keys on a Toshiba Portege Ultrabook, but they don't feel like they travel as much as the keys on a Lenovo ThinkPad T440s. That said, it's a great keyboard for long typing sessions — especially at night with the backlight illuminated. The board takes a little getting used to because the right-most column consists of the Page, Home and Delete keys. This means that Delete is not in line with the Backspace and Enter keys like it is on most other notebooks.

There is a dual pointing device that allows you to use either the touchpad or the pointing stick to move the cursor around the screen, and we love the soft left- and right-click physical buttons that are present for each device. The concave tip on the pointing stick is comfortable against fingertips, and the finish on the touchpad is smooth. We didn't have any issues worth mentioning regarding these pointing devices (except for the slight pausing of the cursor we mentioned earlier, which seemed to disappear by the end of our review).

Speakers reside above the keyboard and they are decent enough for when you to listen to a presentation or watch a YoutTube video, but they don't produce a lot of bass and the sound range overall is not very dynamic. Plug in some headphones or use Bluetooth to hook into a wireless speaker system if you want to get good audio output (it worked a treat with our Bluetooth-enabled Rotel RA-11 amplifier).

This is a good laptop. It's well built, has plenty of features, and its screen is of high quality. The keyboard is also comfortable to use once you get used to it, and its backlight looks good at night time. Battery life wasn't great, but there are options to improve it.

It's an Ultrabook with more grunt than normal, and it should be considered if you want a mobile workstation on which to run design or modelling software and don't want to lug around a behemoth. Configurations and prices vary.