HP Veer preview: The HP Veer is a tiny smartphone with impressive specifications 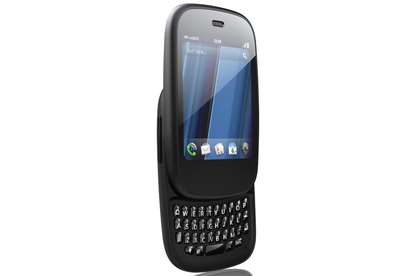 HP's Veer smartphone may have a tiny footprint, but it still includes all the benefits of the webOS platform, along with a physical QWERTY keyboard.

Tiny smartphones have never really been hugely successful, but HP obviously thinks there is a market for them; its HP Veer smartphone weighs just 103g, has a compact 2.6in touchscreen and is powered by Palm's webOS platform.

The HP Veer smartphone has a 2.6in touchscreen with a resolution of 320x400 pixels, a 5-megapixel camera, a gesture area for navigation, a slide-out QWERTY keyboard, and a Flash-capable Web browser. The Veer is powered by a 800MHz Qualcomm processor, and will come with 8GB of internal memory.

The HP Veer smartphone runs the Palm-developed webOS operating system that powered the Palm Pre smartphone; a product that sadly never made it to Australian shores. HP acquired a struggling Palm for US$1.2 billion in July 2010, and the Veer is one of the first in a suite of webOS-powered products promised by the company.

Despite being small, the HP Veer includes a full slide-out QWERTY keyboard that Palm products were famous for, along with the full webOS capabilities; multitasking via "cards", HP Synergy, which groups contacts from multiple sources in a single application, and the ability to synchronise documents with Google Docs, QuickOffice, Dropbox and Box.net.

The HP Veer can also act as a wireless mobile hotspot, sharing the phone data connection with multiple devices, and is equipped with "touch-to-share" technology, which enables users to share content, read text messages and answer phone calls from a compatible HP smartphone or TouchPad tablet by simply tapping the devices together.

HP has announced it will first be targeting markets where webOS is currently available, so at this stage the HP Veer smartphone is unlikely to be released in Australia.