HP's SimpleSave Portable makes backing up a PC easy, even for novices 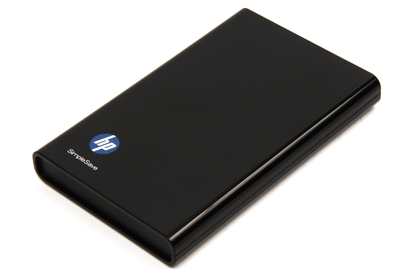 If you have never backed up your PC before, the HP SimpleSave Portable external hard drive is a fantastic way to get started. It is cheap, easy to use, and can be customised to suit a range of requirements.

HP's SimpleSave Portable is a 320GB external hard drive that can automatically back up data from multiple PCs with minimal input from the user. The included software is geared towards novices and is extremely easy to use, though we would have liked some more comprehensive backup options.

Though the SimpleSave Portable can be used as a run-of-the-mill portable hard drive, its main appeal is what HP describes as "hands-free" backup. Like Seagate's Replica, the HP SimpleSave allows you to back up PCs with little user input.

The SimpleSave software works by finding and backing up particular file types on a computer's internal hard drives; 330 different file extensions are supported out of the box, but the software allows you to add your own file types, too. Custom extensions must be added one by one. You can select which file types are stored on the SimpleSave Portable, and you can enable or disable entire groups of file types (such as different types of media or office documents, for example).

The SimpleSave software backs up folders as well, though it excludes the Program Files folder by default. This prevents the SimpleSave Portable from backing up unnecessary files. You can easily change the backup schedule to include or exclude other folders on the hard drives. Unfortunately, the portable hard drive can't be used to back up and restore an entire PC. We found that the SimpleSave software enabled "Other" file types by default, which included some obscure file types (like DAT files).

The SimpleSave software doesn't require installation; it launches directly from the SimpleSave Portable external hard drive when connected. Once launched, the software is largely automated, though you can interrupt the process to access advanced settings or change which folders the drive searches for files to back up. The software provides two 25-second countdown timers before it begins backing up your PC according to the enabled file extensions. The backup runs as a background task on the computer and won't interfere with other programs.

Once the initial backup is complete, you can back up another PC or leave it plugged in so it automatically continues to backup. There is no way to set the frequency of subsequent backups. After the initial backup, the SimpleSave Portable will back up new files or new versions of the same file. As the backup is incremental, older versions of the same file on the portable hard drive will be overwritten.

File organisation is fairly rudimentary. Backups for each PC are placed in folders marked in incremental numbers, and navigating through them to find a single file or directory using Windows Explorer can be a pain. The SimpleSave software allows you to restore files and directories to their original path or another one.

While this portable hard drive isn't particularly speedy, it doesn't necessarily need to be: the SimpleSave Portable is geared towards backups that are to be performed when a computer is idle. It doesn't require high performance to do this. We would have liked Mac support and the ability to create a disk image, but the SimpleSave Portable is fantastic if you want to back up your photos and MP3s, for example, rather than one or more whole computers.