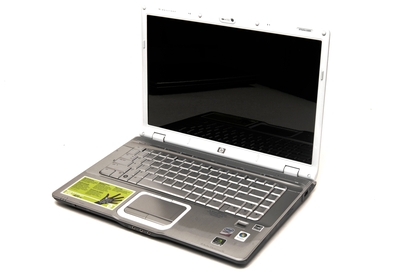 A well-performing unit that succeeds in both style and substance, the HP dv6800 is a good device for most environments. Its relatively low battery life and lack of Gigabit Ethernet, and the fact that Blu-ray movies overscan at 1080p are the only negatives and these are minor points.

The HP Pavilion dv6837tx_02 is an attractive unit that is hard to fault. Feature-packed and great value at $2199, this laptop's only drawbacks are a graphics card that fails to scale full high-definition output during Blu-ray movies, low battery life and a competitor that offers an alternative configuration at a similar price.

Having a Blu-ray drive was once a rarity in a laptop, and they were found only in the most expensive of units. As the dust from the next-gen format war finally settles, however, the victorious Blu-ray is becoming increasingly common in mid-range models. HP's $2399 entertainment-focused Pavilion dv9800 (dv9821tx) provides a Blu-ray drive, as does this notebook.

This laptop's 15.4in screen, while producing excellent colour contrast and no ghosting when watching Blu-ray movies, has a native resolution of 1280x800, which is not full HD. An HDMI port is provided to facilitate viewing on full-HD-capable screens, but the NVIDIA GeForce 8400M GS that handles the output will overscan the image and cut off the edges of any movie viewed at 1920x1080.

Fortunately, by adjusting the scaling option through the NVIDIA control panel's advanced settings, the Windows desktop can be easily reduced to fit a HD screen. This means that you won't lose your start bar and can watch DVDs without problems. But even with the desktop properly scaled, Blur-ray movies will still be slightly overscanned.

Blu-ray aside, another key feature of HP's entire Pavilion line is interesting designs. To use an old Thai phrase, "same same, but different": HP seems to enjoy playing with standard colours and designs by making them subtly different. It could be a change of pattern as is the case in this unit and the Pavilion dv3000 (dv3021TX), or an unusual colour like that found on the Pavilion Thrive Special Edition Entertainment Notebook PC dv6724TX.

Although well-executed and suited to the modern home, there is a good reason for uniformity in design. Many business users enjoy having a box that looks stock-standard. Although this unit isn't aimed at business users, its design may deter some potential users who would otherwise enjoy using it at work as well as at home.

The device isn't all looks and no substance. The processor running the show is the proven and efficient 2.5GHz Intel Core 2 Duo T9300. A generous 3GB of DDR2 RAM is installed, and the 320GB hard drive, which spins at 5400rpm, means plenty of data can be stored.

The speed of the system is shown by our WorldBench 6 testing. The Pavilion's score of 89 means that it can handle taxing tasks, such as video editing, and that it's also good for multitasking. The CPU's smoking hot speed was confirmed by our iTunes test, where we convert 53min of worth of WAV files into 192Kbps MP3s. The HP completed the task in just 68 seconds.

The graphics card isn't nearly as impressive. Its 3DMark06 score of 1552 means that the vast majority of newer games won't run at all. By contrast, the similarly priced Dell XPS M1530, with 4GB of RAM, produced a 3DMark06 score of 4311, while the slightly more expensive Toshiba Satellite A300 (PSAG4A-02600M) produced 3896.

Although all three systems use T9300 CPUs, the HP offers 3GB of RAM instead of the 4GB that the others provide. The Dell offers a built-in hybrid TV tuner and the Toshiba comes equipped with an FM tuner. The HP offers neither. The trump card up HP's sleeve is clearly the Blu-ray drive, which accounts for a lot of the $2199 price tag.

When looking at ports and connectivity, the HP remains a strong contender. Apart from the aforementioned HDMI port, FireWire, D-Sub, S-Video and three USB 2.0 ports provide easy access to a range of devices. The ExpressCard/54 slot provides good expandability, and the built-in Bluetooth 2.0 module allows users to connect peripherals such as headphones very easily.

The lack of Gigabit Ethernet is disappointing at this price point; 10/100 Ethernet is provided and the unit does have fast 802.11 draft-n wireless networking. A fingerprint reader sits on the right-hand palm rest, adding that extra little bit of security.

The results from our DVD rundown test were unimpressive, with the time of 1hr 16min indicating you shouldn't stray too far from power points. This test is a worst-case scenario, however, and good power management will see the HP lasting a great deal longer. With a weight of 2.75kg without the power supply and 3.25kg when included, it's unlikely this unit will be used by road warriors anyway.