Pavilion dv6 review: A great notebook for the home, it's fast and has a Full HD screen 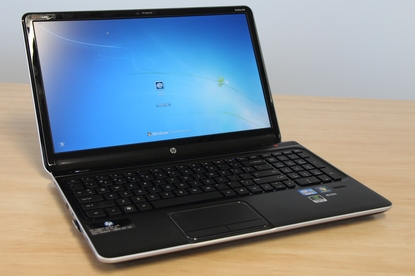 The Pavilion dv6-7030tx is a fast Ivy Bridge-based notebook that also has an excellent, Full HD screen. It's well suited for home users who want a good computer not only to get stuff done, but also to get fun stuff done. We just wish it had a better Wi-Fi card in it, and there are certain aspects of the design that we'd change, too, such as the cover on the Ethernet port. All up, though, a good unit.

The HP Pavilion dv6-7030tx is the high-end model in HP's dv6 range, featuring an Ivy Bridge-based Intel Core i7-3610QM CPU, 8GB of RAM and a Full HD screen. It's a laptop that's designed for home use, and especially for fun stuff, be it watching movies, editing photos or playing games. Interestingly, it's also not a very heavy notebook considering its 15.6in size — it tips the scales at only 2.5kg.

The look of the Pavilion dv6 is classy and HP has used a combination of brushed and glossy black finishes, as well as silver trim, to break up the aesthetic. There is a glossy bezel around the Full HD (1920x1080-pixel resolution) screen, but the screen itself has a matte finish so it's not susceptible to reflections. The palm rest has a brushed finish that feels good under hand and gives the unit a little bit texture. It's the same finish as the lid, and the lid also includes a white, illuminated HP logo.

It's a notebook that's slightly thicker at the back (35mm) than it is at the front (30mm), which gives it a slight slant and makes it look somewhat sporty. Around its edges you can find four USB ports (three of which are USB 3.0 and one which is stuck at USB 2.0 speed), HDMI, VGA, separate headphone and microphone ports, and an SD card slot. You don't get a TV tuner with this model, but this is something that can be added later via USB if needed. A Blu-ray player/DVD burner is present for all your optical media needs. Oh, we almost missed the Gigabit Ethernet port. It has one, but it's covered by a little trap door and can be difficult to work with.

You also get a webcam, Blueooth, Beats Audio processing and 802.11n Wi-Fi. The Wi-Fi isn't great though, which is a shame considering this is the most expensive dv6 model. HP has installed a Broadcom 4313GN 1x1 adapter, which was quite slow in our tests and is one of the disappointing aspects of the configuration. A dual-band Intel module would make this notebook superb.

The build quality of the notebook is solid overall. We didn't notice any creaking in the base and the hinges held the screen in place firmly at our desired angles. However, the hinges could be a little better — they allow the screen to shake a little too much for our liking. The optical drive also could be fitted in the base better. Its right side noticeably dips a little from the body. We'd also get rid of the Gigabit Ethernet port cover and bring the port out so that it's flush with the edge and easier to use.

The Gigabit Ethernet port has a cover on it that can be annoying when trying to plug in a cable.

The optical drive on the right side didn't seem to fit the body of the laptop perfectly and was a little droopy.

As for the configuration, it's headed by a third generation Intel Core i7-3610QM CPU, which has a standard frequency of 2.3GHz, four cores and Hyper-Threading. It's joined by 8GB of 1333MHz DDR3 SDRAM (via two 4GB modules), a 1TB, 5400rpm hard drive and an NVIDIA GeForce GT 630M graphics adapter with its own 2GB of RAM. It's a configuration that can easily tackle office and productivity tasks, and it can be used for tougher tasks such as image and video editing, and video transcoding.

It can be used for some gaming, too, and its score of 9548 in 3DMark06 is a good indication of this — it won't be able to run games at the native resolution of the screen and with full details though, so you'll have to compromise those for performance. However, that score is a little on the low side. The ASUS N56VM, which has a similar configuration to the dv6, recorded 10756 in 3Dmark06. The dv6 was a little faster than the Lenovo ThinkPad Edge E530 though, which has the same graphics card but a slightly faster CPU (a Core i7-3612QM compared to a Core i7-3610QM).

Its 1TB hard drive (a Seagate ST100LM024 model) may have a slow spin speed of 5400rpm, but it also has a high data density. This allowed it to produce a good result of 51.43 megabytes per second (MBps) in our file duplication tests, and it also put up a good showing in CrystalDiskMark, in which it recorded a read rate of 103MBps and a write rate of 90Mbps. Compared to the ASUS and Lenovo laptops, the HP's drive proved to be faster in almost all of the tests, only losing out to the Lenovo's CrystalDiskMark write rate, which was 97.79MBps for its 1TB drive.

All up, the dv6-7030tx put up solid performance numbers and most users should be happy with what it can do. There is some pre-installed software that might slow things down — it took around 47sec to cold boot in our tests — but you can remove it all if you don't want to use it.

A 6-cell, 62 Watt-hour battery is installed in the base of the dv6 and it provides a respectable life away from the outlet for a Full HD, Core i7 notebook. In our rundown test, in which we disable power management, enable Wi-Fi, maximise screen brightness and loop an Xvid-encoded video, the dv6 lasted 3hr 19min, which is not as long as the ASUS N56VM and the Lenovo ThinkPad Edge E530, despite the HP having a more powerful battery. As mentioned though, the screen on the HP is Full HD and little more power-hungry than the 1366x768-pixel panels in those laptops.

We do really like the Full HD screen. Its high resolution is perfect when multitasking with productivity applications and it's a perfect match for the Blu-ray drive that's present. We didn't have any problems with its viewing angles — we never had to adjust the tilt at all while watching movies or viewing photos — and it has a matte finish that didn't reflect lights. Basically, it's one of the best selling points of this notebook, and perhaps the one component that makes this notebook a little more expensive ($1699) than similar notebooks from competing brands.

The keyboard is a good one, although HP has gone for the "cram as many keys as possible into it" approach — it has a full number pad at the expense of some half-height arrow keys and no separation for the arrow keys against the regular keys. The keys are very comfortable to type with as they provide adequate travel and response, and they have a nice, matte finish. The keyboard isn't backlit, which is a little disappointing, but if you're working on this notebook at night, the chances are you'll be at a desk with a lamp close by — not sitting on the couch in front of the telly.

A 98x47mm Synaptics touchpad resides on the palm rest, and unlike most modern touchpads, its left- and right-click buttons are proper buttons and not hidden underneath the pad. We had a good experience using the touchpad and found it to be responsive and accurate for the most part, but there were instances where the pointer moved off the spot we intended to tap on. Three- and four-finger gestures are supported and these worked well in our tests.

The speakers that are present in the dv6 are quite small and, even though they are complemented by a sub-woofer in the base, the sound is simply not powerful enough, nor rich enough to be pleasing. Don't look at the Beats logo on this unit and think it will offer great sound — you'll be better off with a good pair of headphones or some external speakers.

The HP Pavilion dv6-7030tx is a very good notebook overall. It's fast thanks to its Ivy Bridge Intel Core i7 CPU, it has lots of internal storage space, it can be used for gaming, and its screen is simply great. However, it could use a much better wireless adapter and a few tweaks to its design to make it better. As it stands though, it's a good notebook to consider if you want a powerful and well-featured home computer for work and play.