A quad-core, AMD Phenom-based HP laptop for under $1000 This quad-core HP Pavilion dv6-3010AX is a great all-round notebook. It can be used as an office machine, a media centre or even as a gaming laptop. We like its build quality and its features, and its performance is good too. For $999, you can't go wrong.

If a sub-$1000, quad-core laptop tickles your fancy, then HP's 15in Pavilion dv6-3010-AX_01 is for you. It runs AMD's Vision Ultimate platform, which comprises an AMD Phenom II P920 CPU and an ATI Mobility Radeon HD 5650 graphics chip, and it's great for heavy multitasking, playing and creating media files and even gaming.

The AMD Phenom II P920 has four dedicated CPU cores and is perfect for multitasking. With 4GB of DDR3 SDRAM, a mid-range graphics card and a 500GB hard drive, you can easily run applications in the background without noticing a slow-down in performance while you work.

Also check out our review of the AMD Phenom II-based Dell Inspiron M501R 15.6in quad-core notebook.

When all of its CPU cores are working at maximum capacity, the HP dv6-3010AX provides similar performance to a notebook with an Intel Core i5-430M CPU such as Dell's Inspiron 15R N5010. In our Blender 3D rendering test, the Pavilion recorded a time of 1min 9sec, whereas the Inspiron recorded a time of 1min. The AMD Phenom II P920 CPU recorded a slower time thanks to its slower clockspeed. The Phenom II P920 has a relatively slow 1.6GHz clock frequency compared to the Intel Core i5-430M CPU, which runs at 2.26GHz and can go up to 2.53GHz if Turbo Boost kicks in.

In our Xvid video encoding and MP3 encoding tests, the slow frequency was more noticeable: it took 1hr 36min to encode an Xvid video and 1min 59sec to encode our test MP3s. This is 14min and 59sec slower respectively than MSI's CX420, which also uses a Core i5-430M CPU. The dv6-3010AX's MP3 encoding time is actually similar to what a 2.13GHz Core i3–based notebook such as Sony's VAIO VPC-EB16FG achieves.

But don't let that dissuade you from considering this laptop. It's much better value than the afore-mentioned Core i5–based Dell and MSI models and the Core i3–based Sony. Basically, the HP Pavilion dv6-3010AX has a similar price to a well-featured Core i3 notebook, and is about $500 cheaper than a similarly featured Core i5 notebook.

In our battery tests, in which we enable Wi-Fi, turn up the brightness, disable power management and loop an Xvid-encoded video file, the notebook's 55 Watt-hour battery lasted 1hr 47min. It's not a great result. Using the less powerful graphics adapter, the battery lasted 2hr 10min. This isn't a major difference in battery life, but it may mean you don't run out of juice in the middle of a movie cliff-hanger. It's not as a big as the difference in battery life as we saw in the Alienware M11x, which is still our favourite implementation of hybrid graphics. 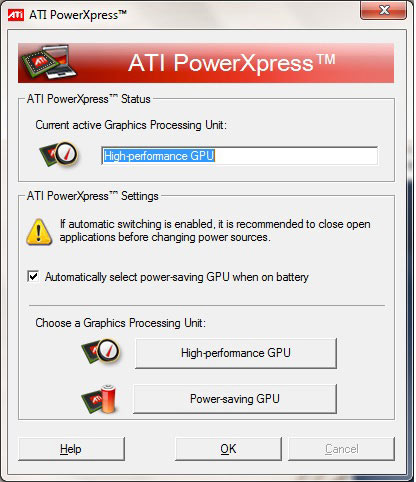 There is no physical switch for toggling between the two graphics adapters. Instead, you have to right-click on the desktop and click on the 'Configure ATI PowerXpress' option. This will bring up the screen that lets you change adapters. You don't need to reboot.

The performance of the Radeon HD 5650 graphics adapter is good enough for running games at the native resolution of the screen (1366x768) but with low or medium image quality. Its score of 6762 in 3DMark06 is approximately 3.5 times greater than the integrated graphics adapter's score of 1849. If you're looking for a gaming laptop for around $1000, the dv6-3010AX is definitely a great option.

The Pavilion dv6-3010AX is well built and feels solid. Its body doesn't creak or make any other disconcerting noises when you pick it up from its edges; its hinges hold the screen firmly in place, yet still allow you to open the notebook with one hand when it's resting on a table. The base has a tapered design that makes the notebook look a lot slimmer than it actually is. The drawback of this is that the cooling vent is located slightly underneath the left edge of the base and can easily be blocked off when you use the notebook on your lap.

After a while, the base becomes noticeably warm on the left side, especially when the high-power graphics card is enabled. If you'll be playing games or using the notebook for other taxing tasks, you'll want to keep the dv6-3010AX on a desk or on one of those Belkin notebook stands. There is an extraction fan that kicks in to get rid of as much heat as possible, and it's a very quiet operator that won't drive you nuts.

The keyboard has soft keys that are spaced out in a chiclet design and are easy to hit. It's a joy to type on this keyboard for long periods of time. The palm rest is large, and the touchpad is one of those fancy models in which the left and right click buttons form part of the touchpad itself. This makes the pad huge (108x65mm) and it can sometimes get in the way while you type. We found that our right palm would often cause the cursor to move. This can be overcome by double-tapping the dot in the top left corner of the touchpad to disable it.

The screen is adequate for viewing documents, photos and watching movies, but like most laptop screens, it has narrow vertical viewing angles. This means that the angle of the screen has to be adjusted regularly if you move around a lot while you use the notebook.

Pavilion dv6-3010AX: Connectivity and other features

The Pavilion dv6-3010AX is touted as an entertainment notebook by HP, and you can use it for watching videos, listening to music and recording TV programs. It ships with a USB-based digital TV tuner, which has a full-size antenna interface on it so you won't have to hunt around for an adapter. It even ships with a mini-rabbit ears antenna that you can clip onto the screen. This might not work properly depending on the reception in your area; we could only get two channels with it (SBS and TVS). A small remote control ships with the unit so that you can control the Windows 7 Media Centre interface from your couch when you plug the notebook into your big-screen TV. You can use the HDMI port to plug in the big screen, and there is also a D-Sub (VGA) port.

You get four USB 2.0 ports along the sides, and the one on the left side doubles as an eSATA port. Networking is aided by 802.11n W-Fi (up to 150 megabits per second) and Gigabit Ethernet. There is a built-in DVD burner, and also an SD card reader, but you don't get Bluetooth. HP includes its pre-boot QuickWeb environment, from which you can browse media files on your laptop and use the Internet.

For $999, the quad-core HP Pavilion dv6-3010AX represents excellent value for money. It can be used as an all-round entertainment notebook, for office work, and even for gaming. It's very well built considering its budget price, it looks good and it has lots of useful features, including a digital TV tuner.