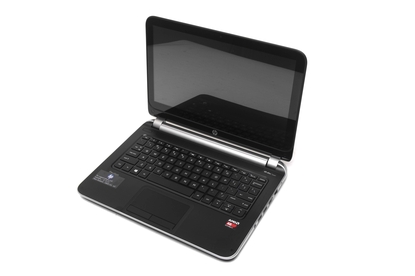 HP's Pavilion 11 Touchsmart is a good model to consider if you're after a laptop that's small, yet well featured. It's not overly fast, but it has enough grunt for basic Web, communications, and multimedia tasks.

HP's Pavilion 11 Touchsmart is an 11.6in notebook (some call it a 'sub-notebook') that runs an AMD A6 accelerated processing unit (APU), 4GB of RAM, and a 500GB hard drive. It's a small and highly portable laptop of 1.5kg, and it’s also cheap. We think of it as a souped up netbook.

It's much more than just a netbook, though. The edges of the Pavilion 11 Touchsmart are adorned with ports that make it a useful all-round computer, and the processing power that's present inside the chassis is much faster than the tiny notebooks of yesteryear. The graphics performance is especially faster than what previous small notebooks could offer, which isn't to say that the Pavilion 11 can be used for anything but basic gaming, but it can handle all sorts of video processing tasks up to 1080p without any problems.

Overall speed from the quad-core AMD A6-1450 APU (AMD's name for a CPU that has built-in graphics processing) is quite decent considering the price point and size of the unit, and you can easily use the Pavilion 11 Touchsmart for common Web browsing tasks (including to view Flash-based video sites), for word processing, for some photo editing, and for viewing video up to Full HD resolutions. It's also useful for multitasking and comes with 4GB of RAM to facilitate this (HP says there is one memory slot inside that can handle up to 8GB).

In our Blender 3D rendering test, the Pavilion 11 Touchsmart recorded 1min 47sec, which is 2min 13sec faster than the last Intel Atom-based netbook that we tested back in 2010 (the Acer Aspire One Happy), and its time of 4min 58sec to encode MP3 files in iTunes is over 1min better. If you're desperate, you can even use the Pavilion 11 Touchsmart to convert video files; it took 45min 22sec to turn a DVD file into an MP4 using HandBrake, which is about 25min more than a typical Ultrabook.

The 3DMark06 benchmark showed the graphics prowess of the AMD A6 APU — it recorded 2948 in this benchmark, which is a stellar result for such a small and inexpensive laptop. The latest 3DMark's Ice Storm test got 22112, Cloud Gate got 1861, and Fire Strike got 287. To this in perspective, an 11.6in Core i5-based hybrid laptop with Intel HD 4000 graphics can get 28272 in Ice Storm, 3060 in Cloud Gate, and 397 in Fire Strike. Basically, the AMD puts up a very good showing when it comes to graphics processing.

For storage, you get a 500GB, 5400rpm hard drive, which is great if you want capacity, but not so great if you're after speed. That said, this drive recorded a read speed of 107.9 megabytes per second (MBps) in CrystalDiskMark, and a write speed of 108.6MBps. These figures are a little better than we expected, though they are not as good as what a solid state drive can achieve. Unfortunately, the chassis isn't easily user serviceable, which means you can't just open it up and install your own solid state drive.

In our battery life tests, in which we disable power management, enable Wi-Fi, maximise screen brightness, and loop an Xvid-encoded video, the Pavilion 11 Touchsmart lasted 3hr 45min, which is a little longer than most mainstream (and more powerful) Ultrabooks that use third-generation Intel Core CPUs — the LG Z360 Ultrabook, for example, got 3hr 24min in the same test. You can prolong the battery life by lowering the brightness or by setting the screen to dim or switch off during idle times, but how long you get out of the battery will still depend on how you use the laptop and how much you work the processor (it fluctuated between 15 and 21 per cent for our rundown test).

The Pavillion 11 Touchsmart runs Windows 8 and like many laptops these days it ships with a touchscreen — it’s how it gets its Touchsmart name. The unit has an overall weight of 1.55kg and the touchscreen doesn't make the unit feel or look too bulky. Whether you can make use of this touchscreen on a regular basis depends on your needs and usage patterns. For us, it's a good way to navigate the Windows 8 Start screen and to use Modern UI apps, but prolonged usage can be tiring — especially as the unit can't be held like a tablet.

It's a highly reflective screen that can be annoying at times, but the unit is small enough to allow you to position it in such a way that these reflections are minimised. The overall quality of the screen is just adequate, which is to say it isn't very bright and it looks a little 'muddy', but we didn’t expect great things from a screen on such an inexpensive laptop. The native resolution is 1366x768, contrast is decent, and it's a useful model on which to view photos while you're travelling, for example; it even has a full-sized SD card slot so that you can easily dump your photos onto it (unless you're using your phone to take photos instead of a compact or D-SLR camera).

For typing, the Pavilion 11 Touchsmart is a decent unit, but those of you with big fingers will find it to be a pain. The form factor of the laptop is small, which means the keyboard feels cramped. HP has implemented a full keyboard, but the keys are smaller than usual in order to fit in the tray. They are Chiclet-style keys, which means off-target hits are usually (but not always) forgiving, and they are soft and responsive. We didn't have to use too much pressure on them at all and the keyboard felt solid overall. The layout is standard, though the function keys are reversed so that the secondary functions are the primary functions — you don't have to hold down the Fn key when you want to change brightness or volume, for example.

You get a relatively generous palm rest for typing, and the touchpad that's installed does a good job of letting you move the pointer anywhere on the screen. Despite being such a small touchpad, 84x41mm (and with separate left- and right-click buttons), it also supports multi-finger gestures (two-finger scrolling and three-finger flicking), and Windows 8 swipe-in gestures. We found it to be an accurate touchpad for day-to-day usage and its texture felt good overall.

Along the edges of the chassis, you get a good array of ports that will be useful whether you want to use this little laptop for work, or as a media centre. Not only does it have a full-sized HDMI port so that you can plug it in to a bigger screen, it also has built-in 10/100 Ethernet, three USB ports (two of them are USB 3.0), and a VGA port is thrown in for good measure. You can easily use this laptop with external peripherals while you're sitting at a desk. As we mentioned earlier, there is a full-sized SD card slot that can be used to easily transfer photos from a camera. You also get a webcam, Bluetooth, a combination headphone/microphone port, and single-band 802.11n Wi-Fi.

We'll close by saying that HP's Pavilion 11 Touchsmart is a fine little laptop if you're looking for something that can handle basic, everyday tasks, or even something that can be used as a media centre or sorts when connected to your TV. It felt a little sluggish sometimes when we used Web-based apps such as Google Docs, but for the most part it was a responsive unit that didn't leave us waiting too long when launching or switching applications. It came out of sleep in a couple of seconds, so it was pretty much always ready to use, and it didn't get too loud during our tests, though its cooling fan was always audible in quiet environments.

We think it's a good proposition if you're pining for something that's small and netbook-like that can run Windows applications. If you want to spend closer to $500, there is a version with a slightly slower dual-core AMD A4-1250 APU and a 320GB hard drive, but we’d stick with the $599 version for the extra bit of speed it supplies.