A HP pico projector with a low overall cost HP's Notebook Projection Companion is a small and very portable DLP-based projector that's perfect for users who regularly give off-site presentations. The best part about it is that its LED light source is claimed to last five years, which means there are no lamp replacement costs. We think it's a great little projector for business users who want a portable model, but we do wish it could run on batteries.

HP's Notebook Projection Companion is tiny and just a little bit awesome. This pico projector is easy to carry around in your notebook bag, and it even comes with a little tripod — no need to fiddle with built-in legs. The best part is, if you own an HP laptop (such as the EliteBook 8440p), you can use the laptop's adapter to power the projection.

The Notebook Projection Companion is based on DLP technology and it has an LED light source. HP claims a life of 10,000 hours for this light source, which the company says is roughly equivalent to five years worth of regular usage, and as such there are no replacement bulbs to purchase. Theoretically, your only outlay should be the projector itself, which costs $699.

The tiny projector uses a proprietary cable to connect to the D-sub (VGA) port of your laptop and it has a native resolution of 848x600. It recognised our notebook immediately when we plugged it in and the laptop's resolution scaled automatically in Windows 7 to 800x600, so there was some unused space either side of the main image. The controls on the projector are simple: you get a power button, a four-way control button, menu and select buttons, and there is a focus ring on the lens.

There's no way to zoom the image that it projects, so the size of the picture will depend on the distance of the projector from the wall or screen. At 1.5m, the projector will produce an image with a diagonal size of approximately 34in. The projector's LED light source is reasonably bright. However, you'll still want to use it in a darkened room and fairly close to a wall for best results — say, 2-3m — because in a brightly lit room the image will be very washed out, especially while viewing bright images or video rather than black text on a white screen. 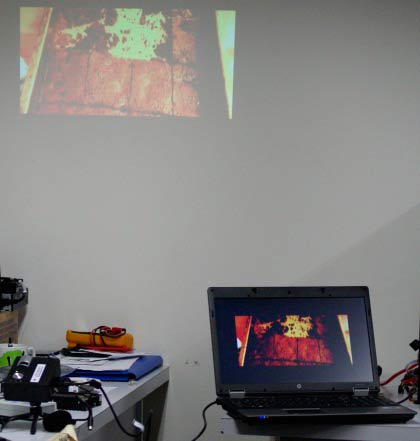 The projector in action while the lights were on. It's fine when the screen is displaying dark colours, but light colours will be washed out. 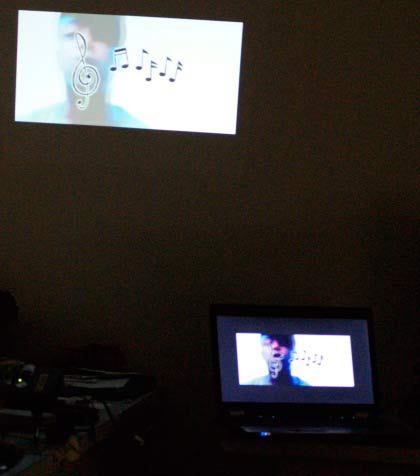 The projector in action when the lights were off. It does a good job of displaying videos — just make sure you get the angles right so that you don't have to tilt your head sideways while you watch.

It's not the type of projector to choose if you'll be giving presentations in a large, audience-filled boardroom. It's more useful for intimate environments; anyone who wants a projector for a small bedroom should look into it, because it won't take up much space and you can easily set it up and then pack it away when you're done.

The quality of the images is adequate, although the colours are a little oversaturated by default — especially red — and the picture is not crystal clear. However overall clarity is more than adequate for displaying PowerPoint presentations and documents; it also does well when projecting video (we got best results in a dark room). We did notice a slight lag between the projected video and the sound coming from the laptop, but it was by no means annoying.

If you set up the projector at a slightly upward angle, you'll end up with a trapezoidal-shaped screen. You can get rid of this by manually adjusting the keystone correction — leaving it on auto keystone correction did not produce a square screen. After adjusting the keystone, we noticed that the clarity of the screen was not uniform; there was blurriness at the top and right side of the screen, and although we could get rid of it by adjusting the focus ring, this just put other parts of the screen out of focus. The blurriness was annoying, but you could still make out the writing and graphics in the affected areas.

The data and power cables plug in to the side of the projector and if you position them incorrectly they can tip the projector over. You need to make sure you give them plenty of slack and this means keeping the projector close to the laptop — of course, it also helps to make sure that the tripod is in a strong position with two of its legs positioned left and right, and the third leg behind the projector (if it's leaning upward).

What would make this projector even more awesome is a battery pack so that you don't have to set it up near an outlet, but since the projector consumes 56 Watts, attaching a battery capable of supplying that much juice for an hour an a half would mean the tiny footprint of the projector would probably double — although we hope HP's R&D department can one day fashion a cool-looking battery stand of some sort.

While it's operating, the projector's fan will make an audible whir that may get on your nerves. There are two fan settings: normal and high. Normal mode slows the fan for a while, but eventually it has to speed up to keep the unit cool. The warm air gushes out of the front of the projector, and there are vents on either side to suck in cool air. After a short while, the underside of the projector will get noticeably warm.

For a one-off cost of $699 and the promise of a long-lasting light source, the very small HP Notebook Projection Companion could make a nice accessory for anyone who has to give lots of presentations at remote offices. It's a good backup in case the office you're visiting doesn't have a projector, but bear in mind that it can only be used effectively in a small and dark room.