Those of you with an eye for style will want to check out HP's Mini by Studio Tord Boontje. It features a very nice 3D pattern of flora and endangered animals on its lid, while on the inside it has all the components of a basic netbook. There couldn't be more of a contrast between the bog-standard netbook specifications and the extravagant styling, but there's no law that states simple netbooks can't look good, and the Mini by Studio Tord Boomtje definitely does look good!

This HP Mini netbook has a name we just love to say: Tord Boontje. It also has a design we love to look at: the lid has sub-surface moulded patterns that depict flora and endangered animals in 3D. It really does look very nice, but the HP Mini by Studio Tord Boontje is an intriguing netbook for reasons other than its looks: it ships with Windows 7 and it runs HP's QuickWeb.

HP's QuickWeb interface is built on Splashtop technology. It resides on a separate chip instead of the hard drive, and it boots up in 9sec. By way of comparison, Windows 7 Starter boots up in 39sec. HP's QuickWeb is a very clean and well-organised interface that lets you use the Internet, listen to music and view photos (from the hard drive or an external device). When QuickWeb is enabled the netbook will boot the interface all the time, unless you change this setting in Windows 7. We had no problems using QuickWeb to connect to the Internet and browse files on the local hard drive, but we did find the touchpad to be too sensitive, and there was no way of adjusting this. 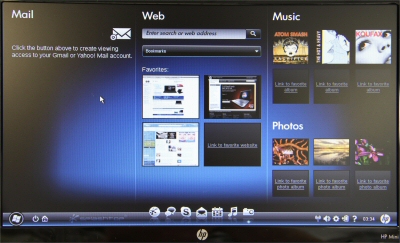 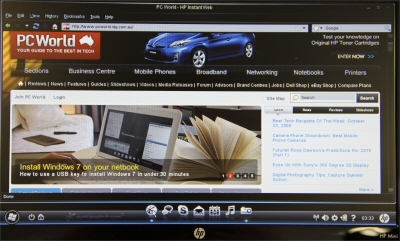 HP's QuickWeb interface looks classy and is very convenient if you don't want to boot up all the way to Windows 7.

On the inside, the HP Mini by Studio Tord Boontje is pure netbook. You get a 1.66GHz Intel Atom N280 CPU, 1GB of RAM, integrated Intel GMA 950 graphics, and a 160GB, 5400rpm hard drive. You don't even get niceties such as Gigabit or 802.11n networking. Instead you are stuck with 10/100 Ethernet and 802.11g. Around the sides, the usual ports are present: three USB 2.0 ports, D-Sub (VGA), 10/100 Ethernet, an SD card slot, and a combination microphone/headphone port. This combination port saves space on the chassis, but is inconvenient if you want to use a pair of headphones and a separate microphone.

HP claims the Mini by Studio Tord Boontje is an environmentally friendly device. However, there is nothing about the netbook itself to suggest that it's going to help save the world — for example, it's not made of recycled materials (its packaging is though), nor does it run off garbage scraps instead of a 3-cell lithium ion battery (which lasted 2hr 2min in our tests). It is merely a low-powered device that can be used for some low-powered computing. The message is simple: if all you need to do is create basic office documents and use the Internet, then you don't need a high-powered, resource-hungry device.

The performance of the HP Mini by Studio Tord Boontje (we told you we like saying it) tells the story. It scored 30 in our WorldBench 6 benchmark suite, which is exactly what we expected out of a netbook running Windows 7. Its iTunes and Blender 3D times of 7min 45sec and 7min 25sec, respectively, are competitive for a netbook, but you still shouldn't aspire to do anything more with it than consuming media or creating basic office files.

Apart from the stunning design, the Mini by Studio Tord Boontje is a stock-standard 10.1in netbook, and one that we've seen before in various guises. It looks and feels just like the HP Mini 2140, for example, and the Vivienne Tam Special Edition Notebook PC shares a similar body style, too, albeit with a slightly different spine design, red paint and a more feminine floral print. The HP Mini by Studio Tord Boontje palm rest and touchpad have floral designs, but the bezel around the screen is just boring old glossy black. The screen itself is not glossy, so it's not annoying to view in bright environments, and it possesses good contrast and brightness.

We like the keyboard, which feels rock-solid and has keys that are 17mm wide. However, the palm rest is too narrow, which makes it uncomfortable to type on the netbook for long periods of time. The touchpad, too, is uncomfortable as its left- and right-click buttons are either side of it instead of at the bottom. The HP Mini by Studio Tord Boontje is sturdy, though, and it weighs only 1.1kg.

For $799, you are paying primarily for the exquisite design and Windows 7 Starter rather than a spectacular configuration. It's missing some niceties that would be welcomed at this price point, such as 2GB of RAM, 802.11n wireless networking and Gigabit Ethernet, but to ignore this netbook because of some shortcomings in its specifications is to miss the point: it's a netbook that's designed for the user who wants something fashionable and unlike anything else on the market.