HP Mini 5102 looks and feels just like Mini 5101, but it has superior battery life and is cheaper HP's Mini 5102 is practically the same as the Mini 5101, but it has much better battery life. You can practically get a whole day of use out of its 6-cell battery (as long as you close the lid when you aren't actively using it) and the large hard drive means you can carry around a substantial library of music and videos. We love the unit's build quality, its high resolution screen and its keyboard, but hate how long it takes to get up and running.

The HP Mini 5102 is a netbook designed with business users in mind. It has an anodised aluminium lid and its sturdy design places it a rung above most other netbooks on the market. It also looks good and, contrary to popular belief, business users apparently do appreciate a bit of flair — so HP has introduced the Mini 5102 not only in black, but also in red and blue.

Physically, the Mini 5102 looks exactly like the HP Mini 5101, which isn’t a bad thing — we loved the 5101. The HP Mini 5102 is small and has a tapered body, getting thinner from the rear to the front. Its large battery gives it a nice slope when resting on a table, and it’s comfortable to type on. We like the fact that the RAM slot can be accessed without using tools, but the keyboard has to be removed in order to get to the hard drive bay. Nevertheless, it’s easy enough to pop off the keyboard and if the drive ever needs replacing. 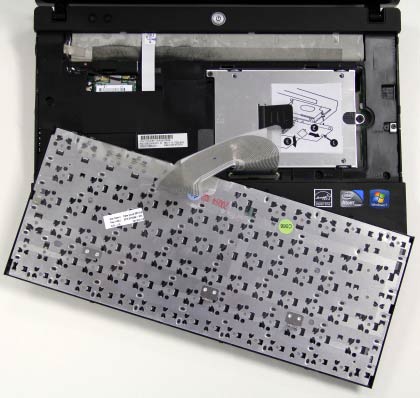 The HP Mini 5102 with its keyboard removed.

The Mini 5102 is also similar to the Mini 5101 on the inside, with the main difference being a newer Intel Atom CPU. It’s still better than the majority of consumer netbooks on the market, mainly because you get 2GB of DDR2 SDRAM (most netbooks ship with 1GB), a 1366x768-resolution screen rather than 1024x576 or 1024x600, and a 7200rpm hard drive instead of a 5400rpm drive. The hard drive is 320GB — which means that you absolutely must transfer all your music and videos onto it if you want to get the most out of it! The netbook's battery has a long 66 Watt-hour rating, which will let you watch at least two movies without requiring a recharge.

The HP Mini 5102 runs an Intel Atom N450 CPU that runs at the same clock speed as the Intel Atom N280 CPU it replaces (1.66GHz), but it has an integrated graphics chipset, which means there are only two main chips in the Mini 5102: the CPU and the I/O controller. This helps to keep the Mini 5102 a smidgin cooler than the Mini 5101 and is the main difference the two netbooks. You still get 802.11 draft-n Wi-Fi (it even uses the same Broadcom 43224AG chip that was in the Mini 5101), as well as Bluetooth and Gigabit Ethernet. There is a built-in webcam that can be used for face recognition security as well as conferencing, and you get a VGA port, an SD card slot, microphone and headphone ports, and three USB 2.0 ports. It’s definitely a well stocked netbook.

Apart from the upgraded processor, one of the other differences between the Mini 5102 and its predecessor is that the newer netbook runs Windows 7 Pro 32-bit instead of Windows XP, and it runs it very well. There is an option to install Linux (SUSE Enterprise 11) or you can still choose Windows XP if your business hasn’t migrated to Windows 7 yet.

But while the performance tests show the Mini 5102 to be slower than the model it replaces, it actually feels reasonably zippy during everyday operation. You can easily use it to browse the Web while you work on documents and listen to music, and standard-definition videos will play just fine. Because the screen is wider than a typical netbook screen, you can even use Windows 7’s Aero Snap feature to line up two windows side by side.

The battery life of the Mini 5102 is stellar. The 66 Watt-hour battery lasted 5hr 3min in our rundown test, in which we disable power management, maximise brightness, enable Wi-Fi and loop an Xvid-encoded video. If you use the netbook for Web browsing and document creation, and you close the lid when you aren’t actively using it, then you can go a whole day without having to plug in to an outlet.

With such a long battery life, it’s a shame that a Sleep-and-Charge style USB port hasn’t been implemented so that you could charge your iPhone in your backpack while on the go, for example. For that sort of functionality, you have to turn to Toshiba’s NB300. 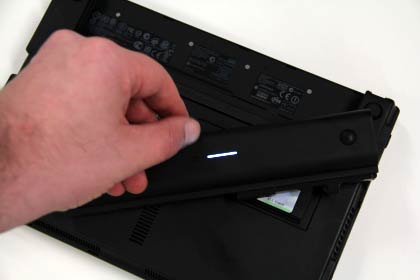 The HP Mini 5102’s battery has a physical indicator to let you know if you need to charge before you hit the road.

We deplore the setup procedure of the Mini 5102. When you first pull it out of the box and boot it up, you have to put up with a setup process that takes well over an hour. This installs all of HP’s utilities and trialware (such as Microsoft Office) and there are some registration screens that require your attention. It’s not a pleasant experience and a busy admin looking to quickly deploy the Mini 5102 will rapidly lose patience.

That said, once it’s up and running you can get rid of all the preinstalled software, or put it to use. There is a credentials manager, file synchronisation software, troubleshooting and maintenance software (whose pop-up reminders can drive you crazy) and Corel Home Office Suite just to name a few. You also get 3D hard drive protection and the ability to encrypt your data. A pre-Windows 7 environment is available, called HP QuickLook; it lets you check calendar entries and contacts. This feature is aimed at users who want quick access to this information when their laptop is switched off. However, if you already have a smartphone then there is no need to use this software. It also has QuickWeb, which as its name suggests, is for browsing the Web. We think that an implantation of Splashtop similar to the one on the HP Mini 210 would be much more useful.

In terms of speed and looks, the HP Mini 5102 is not an upgrade over the HP Mini 5101. In fact, all you’re getting with this model is a revision of the same netbook that was released 10 months ago, but with much longer battery life and a much lower retail price. Whether you’re a business user or not, we think it’s worth going for the Mini 5102 over many other netbooks on the market, especially because of its excellent battery life, good build quality, larger screen resolution, faster networking and larger memory capacity. However, we do wish HP would give us a break from all the preinstalled utilities and a very long setup procedure.