Although this printer is expandable and holds lots of paper, it falls short in fundamental areas. 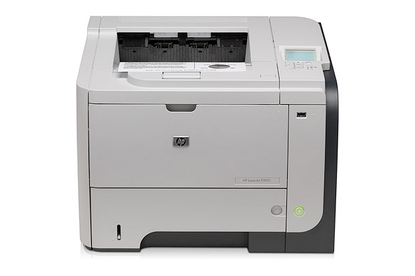 Although this printer is expandable and holds lots of paper, it falls short in fundamental areas.

The HP LaserJet P3015d is a midpriced monochrome laser printer that doesn't realise its full potential. Though the company touts it as an enterprise model, it's expensive to operate and it has limited connectivity options.

The LaserJet P3015d performed speedily in our tests. It managed a top pace of 36.5 pages per minute printing plain text — shy of HP's claim of 42 ppm, but still faster than the results from two of its like-priced competitors, the Ricoh Aficio SP 4210N and the Xerox Phaser 3600/N. Its graphics speeds also largely exceeded the average. As with most monochrome lasers, however, print quality beyond text was disappointing: The LaserJet P3015d's images showed grainy textures and visible banding.

This printer lacks an Ethernet port, which limits the unit's connectivity, and in my tests, during setup, it led to a few hiccups. The installation wizard prompted me to select the type of connection (local or network) that I planned to use. The Getting Started guide even illustrates plugging in the Ethernet cable. But where? Around back, the printer does have an enhanced I/O slot in case you want to add an internal print server or parallel port. And on the face of the printer, next to the multipurpose tray, is an external host USB port for printing photos or PDF files directly from a flash drive.

At least the machine handles paper the way an enterprise laser should. The LaserJet P3015d ships with a 100-sheet multipurpose tray and a 500-sheet main tray. You can increase the maximum paper capacity to 1600 by adding two optional paper trays. Even better, the P3015d comes standard with an automatic duplexer. The P3015d's main paper tray is extremely sturdy and has well-designed, smooth-sliding paper guides. The multipurpose tray has extensions that telescope outward to support longer media. The extensions are sturdy and that's a good thing, because it's possible to slam the tray closed with the extensions still out.

The machine ships with a 6000-page black cartridge. A replacement cartridge costs $244.71, or 4.1 cents per A4 page. Predictably, the 12,500-page high-yield cartridge is a better deal: It costs $335.48, or 2.7 cents per page. That's an average cost per page compared with monochrome lasers overall, but more expensive than the best rates you can get from the Ricoh Aficio SP 4210N and Xerox Phaser 3600/N. The toner cartridge slides in and out of its slot easily enough, though if you're not careful you can easily grab the flimsy plastic fuser cover at the bottom of the cartridge rather than the much sturdier handle higher up. Illustrations inside the printer show you how to remove the cartridge, but the raised black images on a black background are hard to see.

Although the HP LaserJet P3015d has speed and roomy paper capacity to its credit, it can't compete as well in print quality and the cost to print. It's a decent printer, but other monochrome laser models we've tested in its price range are a better deal overall.