HP's Envy 6-1001tx is an Ultrabook that's large, but it just squeezes into Intel's requirements for thickness. It's a good model to consider if you want a thin and reasonably light notebook for gaming. You get a good configuration with lots of RAM, storage and graphics power, but it doesn't have an Ivy Bridge CPU. It's a notebook that's well built and it feels good to use. It just needs a better screen and Wi-Fi adapter.

The HP Envy 6-1001tx is a large, 15.6in thin-and-light Ultrabook that has a focus on all-round computing performance. While it doesn't feature a brand new Ivy Bridge-based CPU, (instead making do with a second generation Core i5-2467M Sandy Bridge model), it's a laptop that ships with 8GB of DDR3 SDRAM, a 500GB hard drive and a discrete AMD Radeon graphics adapter. This is a strong configuration for $1399 (it can be found cheaper if you shop around), but it means you miss out on a good screen, fast Wi-Fi and niceties such as a backlit keyboard. If you just want a thin laptop that has plenty of memory, fast graphics performance, along with lots of storage, then it's a good model to consider.

It's a notebook that weighs close to 2.2kg and, because it's 15 inches, it does need a big carry bag. It looks good with its burgundy base and black palm rest and we really like its build quality. Despite being wide and deep (374x253mm), it's only 22mm thin when taking into account its rubber feet. It's 21mm thick when disregarding the feet, and this only just meets the criteria for Ultrabooks larger than 14 inches. It's made out of metal and it feels very solid, even when you hold it from the corners and try to bend it. Furthermore, the texture of the palm rest and base is not glossy; it's soft and grippy and really nice to hold. The screen has a bit of flex to it though, which is understandable given its large size. The hinges that hold the screen are strong and they keep the screen firm enough so that it doesn't shake back and forth too badly when the laptop is moved about.

Air intake vents are located on the base of the chassis, while exhaust vents reside close by on the spine. When you use this notebook on your lap for extended periods of time, you need to be mindful of these vents; blocking them will cause the chassis to warm up a lot quicker and things could get uncomfortable — especially if you are watching video or doing other things that require relatively high CPU or graphics card usage. In general, when used for typing and basic Web browsing, the Envy 6 was comfortable to rest on our lap, but got noticeably warmer as time wore on, but more so on the left side where the hard drive is installed. Incidentally, the bottom panel is held by 12 screws and is very difficult to remove; it's not a model that be serviced easily by end users.

Around the edges of the chassis, you get a standard array of ports: three USB ports (two on the left side and one on the right side), separate microphone and headphone ports, HDMI, Gigabit Ethernet and an SD card slot. The two USB ports on the left are of the USB 3.0 variety, while the one on the right is just plain old USB 2.0, but it can also be used to charge things when the laptop is off or sleeping. Connectivity also includes Bluetooth and 802.11n Wi-Fi, but the Wi-Fi module is not a good one. It's only a 1x1 Broadcom 4313GN module, which can only work in the 2.4GHz band and it doesn't support Intel Wireless Display. It connected at only 72 megabits per second to our router in a best-case scenario during our tests.

A webcam and microphone are installed in the glossy bezel of the screen. You also get Beats Audio processing, but there isn't a dedicated button to bring up its control panel. The two speakers are comparably average at best, offering a reasonably loud and clear sound that's flat overall — we found the speakers in the Samsung Series 9 Ultrabook to be more enjoyable. You can play with the volume and equaliser settings to see if you can get better response for your music styles, but just connect some speakers or headphones if you want more low frequency response. (At the time of publication, some retailers such as Harvey Norman are offering Beats Solo headphones with this unit.)

You get a strong configuration in this thin notebook that's useful for more than just office work. The dedicated AMD Radeon 7670M graphics adapter can even turn this notebook into a gaming device. A result of 7919 was returned in 3DMark06, which is good enough to run games at relatively low resolution and graphics detail; many older games will fair better than new ones. The integrated Intel graphics got 4310 in the same benchmark, so you can see that the AMD graphics provide a great boost in performance for such a thin notebook.

The overall performance of the Envy 6 was good in our tests, if, at times, inconsistent. It recorded expected times of 1min and 1min 10sec in our Blender 3D rendering and iTunes MP3 encoding tests, respectively, but it didn't achieve these times all the time. Sometimes the results were slower by up to 15sec and we couldn't peg this performance decrease to anything specific. That said though, while using this notebook for everyday tasks, such as creating documents, Web browsing and photo editing, we didn't notice any sluggishness. In the AutoGordianKnot DVD-to-Xvid file conversion test, the results were also inconsistent, with the fastest being 1hr 8min. This is 5min faster than the HP Folio Ultrabook, which uses the same CPU as the Envy 6.

The 5400rpm hard drive also proved to be swift in our tests, recording 115 megabytes per second (MBps) in the CrystalDiskMark read test, and 89MBps in the write test. In our own file duplication test, it recorded a very quick 64.24MBps. A 32GB solid state drive is also installed as a cache. Boot up time around 21sec and resume time from sleep was around 3sec.

As far as battery life is concerned, the Envy 6 put up a good showing. In our rundown test, in which we disable power management, enable Wi-Fi, maximise screen brightness and loop an Xvid-encoded video, the laptop lasted 4hr 4min. This is a fantastic time, especially for a 15in model. When used for regular Web browsing, word processing, viewing photos, watching occasional YouTube videos and listening to MP3s, we got just on six hours worth of life. That was with the screen brightness set at the halfway mark and without dimming or switching off. With a better power scheme, you could get even more, but this will depend on your workload as well.

The input devices on the Envy 6 are very good. We enjoyed typing on the chiclet-style keys, which felt soft and responsive, and which have a matte finish that isn't slippery. The keys have a standard layout for the most part, although there is a column of page and home keys on the right side that takes some getting used to — the delete key is at the top-right corner though, which we're pleased about. As well, the up and down arrow keys are half-height and can be hard to feel for. The function keys serve to change brightness and act as multimedia keys as their primary function, but this can be changed in the BIOS if you prefer good old fashioned F-keys. One thing that's disappointing is the lack of a keyboard backlight on this model, but unless you do a lot of typing in the dark, you probably won't miss it. 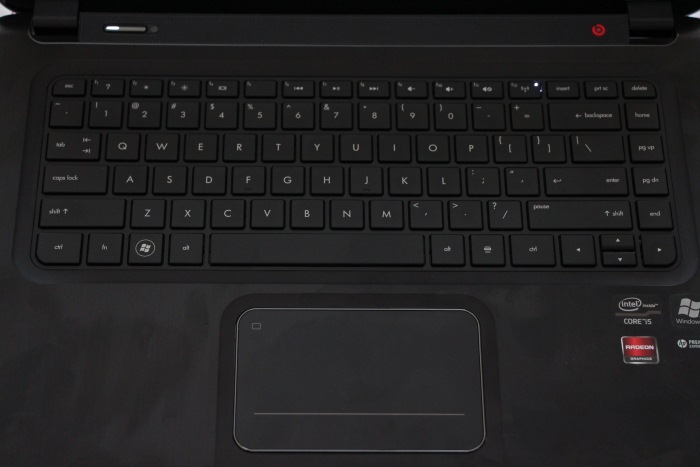 The keyboard and touchpad. And some finger marks.

The large touchpad (111x69mm) never got in the way while we typed, despite being equidistant from the left and right edges of the chassis, rather than being centred under the spacebar. It's a Synaptics pad that has a spiral texture on it, and it felt very smooth. It was responsive and accurate, palm rejection worked very well, and two- and three-finger gestures were always recognised correctly. We just wish that the pad also supported four-finger gestures — the pad is definitely big enough for them. The left- and right-click keys are located under the touchpad. Operations such as right-clicking-and-dragging worked well, and there is a visible line on the pad to let you know exactly where you should be pressing when using the buttons.

The drawback to not having a backlit keyboard is that you need to switch on a light if you want to be able to see the keyboard, which means that the glossy screen will then reflect that light source if it's behind you. This will create an uncomfortable viewing experience, especially on scenes with predominantly black backgrounds. The screen on the Envy 6 definitely isn't a good one. It's a 14in size that only has a 1366x768-pixel resolution and its vertical viewing angles are very narrow. We had to regularly adjust the tilt in order to see images properly.

While it doesn't feature Intel's latest and greatest CPU technology, the HP Envy 6-1001tx Ultrabook is, nevertheless, a very good unit. Its graphics performance makes it suitable for running some games, and its battery life makes it a good model to take out on the road with you (if you can handle the large width and depth of the notebook). It's well built and it feels good to use. We just wish it had a dual-band wireless adapter and a better screen.

Note: Originally we called this notebook a Sleekbook. HP has confirmed to us that it actually is an Ultrabook. Apologies for any confusion this has caused.