The design of the HP Envy 15 is essentially the same as the Envy 13, majoring on solid construction from a magnesium alloy chassis and a multitouch button-less trackpad 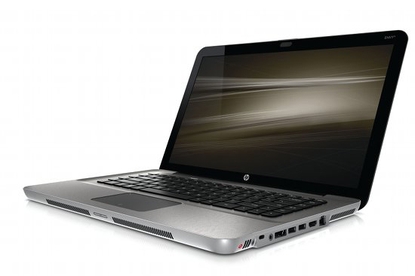 There is potential for high performance in this laptop with its interesting processor, but there's also enough niggles to make us cautious before making a recommendation. Given the high power demands of the CPU, this is still more of a desktop replacement, a static desk design which makes the separate optical drive an satisfactory solution over a regular integrated unit. And professional users may be turned off by the glossiness of the screen, its low resolution, or both. Ultimately it's a brave attempt to catch up with the MacBook Pro range, but like the 13in HP Envy, the Apple original pips it in many ways. Mobile gamers, meanwhile, will appreciate the good graphics performance.

The HP Envy 15 is the larger of two premium notebooks from HP, this model featuring a new Core i7 quad-core Intel processor. The smaller HP Envy 13 is an attractive 13in notebook, distinguished by thoughtful design and incredible battery life. But there's little new in terms of its essential components - unlike this larger HP Envy 15 which adds some spicy novelty with a brand-new quad-core processor.

The design of the HP Envy 15 is essentially the same as the Envy 13, majoring on solid construction from a magnesium alloy chassis and a multitouch button-less trackpad.

In place of a 13.1in widescreen, we have here a 15.6in 16:9 panel. And instead of edge-to-edge glass, there's a separate shiny black bezel to frame a - predictably frustrating - reflective LCD screen.

Resolution is rather on the low side. Perhaps 1366x768 isn't too terrible, but it's the same as little brother's and somewhat lower than you might expect for a 15-incher.

A slightly better selection of ports is offered on the Envy 15, compared to the somewhat bereft Envy 13; namely built-in Gigabit Ethernet and an extra combined eSATA/USB port.

These join two USB 2.0, a combo audio in/out jack and an HDMI video port, all ranged along the right side. You also get two more USB ports after plugging in the external Lightscribe dual-layer DVD±RW drive.

As with the Envy 13, you'll find a large touchpad, 100 x 62mm, that supports multitouch gestures such as two-finger scrolling and pinch-to-zoom. There's no separate left/right buttons; instead the whole pad is hinged and you must aim for the appropriate front corner to activate a mechanical click.

It's a smooth and precise furnishing even if it doesn't provide quite the same tactile precision as you'll find on the Apple MacBook Pro, from which HP unashamedly pinched the idea.

There's a subtle cosmetic difference between 13 and 15 models in the treatment of the display lid. Both sizes get a metallic gunmetal-grey hessian texture for the palm rest area; the Envy 15 sees this art-tech effect spread over to the back of the screen lid.

The result is either quite stylish or 20 minutes away from becoming dated, depending on your outlook. We'd certainly argue that the simple plain satin-grey metal of the Envy was more timeless.

But it's the new processor technology inside that sets the Envy 15 apart. The Core i7-720QM is the slowest of three new mobile quad-cores that Intel is making (1.8GHz and 2.0GHz are the faster versions), clocked at an seemingly underwhelming 1.6GHz.

This chip is able to auto-overclock on the fly, though, up to 2.8GHz providing it senses that temperatures aren't running too high.

Then there's TurboBoost, Intel's name for the technology that intelligently switches off unused cores and puts more power into those still in operation, as and when it's needed.

For a ‘1.6GHz' laptop, the Envy 15 certainly punched above its weight in our tests. We did notice some inconsistency in repetitions of the individual test results from the ten program that run within WorldBench 6.

This suggests varying levels of overclocking were in operation depending on how hot the HP was running at the time; however the good final result of 95 points more than shows the potential of this architecture.

All that power demands power, of course. Intel lists a thermal design power (TDP) figure of 45W, a very high figure for a modern laptop, and some reports suggest this figure can rise further when overclocking kicks in.

In use, the laptop would get hot on the underside when asked to be productive, and audible fans revved up to pump out plenty of hot air from inside.

It shouldn't be a complete surprise then to find that battery life results were rather poor. Using its onboard 53Wh battery, we saw the HP Envy 15 last just 2 hrs and 15 mins (145 mins) in MobileMark 2007 Productivity.

In our 'low' test of 1024x768, High quality and DirectX 9, the Envy 15 averaged 34fps. We couldn't test at screen-native resolution, but 29fps was possible at the same quality at 1280x720 resolution. While these results don't scream of graphics performance, remember that playing Crysis on any laptop with reasonable rendering quality is never an easy feat.