A 12.5in business laptop with good speed and features, but still a little underdone This small business laptop has a lot of features for its size, and it supplies good performance via its full-voltage Intel Core i5 CPU. It could use some more standard features though, such as SSD, integrated 3G and USB 3.0, but it's still a good overall unit.

This 12.5in HP EliteBook laptop packs an Intel Core i5-2540M CPU and a DVD burner in its small base, which are features that make it both a powerful and a well-equipped business tool. It has strong build quality and it feels comfortable to type on thanks to a good keyboard, but it does feel quite heavy for what it is (it's a little over 2kg). Part of that is due to the built-in DVD burner, and also because of the six-cell battery that sits in the spine.

There is a good roundup of features on the EliteBook 2560p, with a lot of modern connectivity co-existing with some stalwarts from the past: DisplayPort and eSATA ports sit alongside a 56Kbps modem and a VGA port; there is Gigabit Ethernet, dual-band 802.11n (Intel Centrino Ultimate-N 6300), Bluetooth, USB 2.0 and an SD card slot. For security, you get a SmartCard slot, a fingerprint reader and TPM 1.2. Expansion is possible through an ExpressCard/34 slot and there is also an opening for a port replicator.

That's a solid technology base for a business laptop, and with features such as DisplayPort it caters more for users at the high-end of town who are likely to want to plug in to very high resolution displays rather than typical Full HD consumer monitors. However, there are some things missing: you don't get USB 3.0, which is a let-down; integrated 3G is not standard, and neither is a solid state drive. We think the addition of these features would make the 2560p a lovely little mobile beast.

The configuration of an Intel Core i5-2540M CPU (with two cores, Hyper-Threading and a speed of 2.6GHz), 4GB of DDR3 SDRAM, integrated Intel HD 3000 graphics and a 7200rpm, 320GB hard drive (Toshiba MK3261GSYN) is more than capable of handling business and multimedia tasks and it's great for multitasking. In our Blender 3D rendering test, a time of 38sec was recorded, which is only one second off the time of many similarly-sized Core i7-based laptops we've seen to date, such as the Sony VAIO VPCSA25GG, for example. It also recorded good times of 46sec and 49min in our iTunes MP3 encoding and AutoGordianKnot DVD-to-Xvid transcoding tests, respectively.

Its 7200rpm hard drive recorded a slightly sluggish 29.04 megabytes per second in our transfer tests, but if we had our way, we'd replace it with a solid state drive — not only for potentially better performance, but also to make the notebook quieter, cooler and a little lighter. The graphics performance of the integrated Intel HD 3000 is good enough to allow some low-end gaming, and this was shown in 3DMark06, where a score of 3766 was recorded. 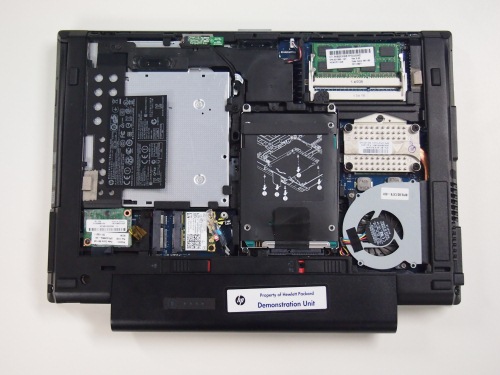 The bottom cover comes off very easily (just slide the release mechanism and pull the cover off toward the front) and provides access to two RAM slots, the hard drive bay, and the Wi-Fi module and 3G slot.

In our battery rundown test, in which we disable power management, enable Wi-Fi, maximise brightness and loop an Xvid-encoded video, the laptop's 55 Watt-hour battery lasted for 3hr 50min. It's not a spectacular time — the aforementioned Sony VAIO S Series laptop recorded one minute more, and that was with a 49 Watt-hour battery and a Core i7 CPU.

We like the usability of the EliteBook 2560p. Its chiclet keyboard has very soft keys that are comfortable to hit. Its touchpad is very smooth with soft left- and right-click buttons and it supports gestures such as two-finger scrolling and three-finger flicks. We don't like the implementation of the pointing device in the middle of the keyboard though — we think it's unnecessary, but understand that some business users might still prefer it over the touchpad.

The 1366x768-resolution screen has a matte finish and decent contrast and brightness. An ambient light sensor can control the brightness automatically, and a screen-mounted keyboard light can be used to illuminate the keyboard at night — although it doesn't work very well. 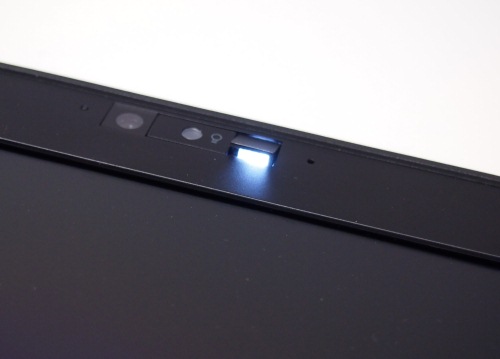 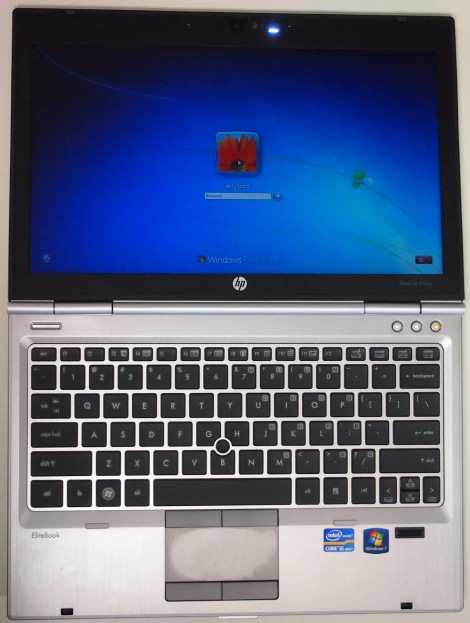 The screen can tilt all the way back, which can be of benefit when giving presentations. And it just looks cool.

The build quality of the EliteBook 2560p feels solid, but we did notice that its DVD drive popped open inadvertently a little too frequently. It may just be a consequence of us handling the notebook a little rough or accidentally hitting the eject button without realising it. In the case of the latter, a keyboard-mounted eject button would be a good idea for HP designers to implement in the next generation of this laptop. The screen hinges are strong and hold the screen perfectly in place and the panels on the screen and the palmrest feel very strong.

Noise can be an issue with this laptop depending on the task you are running. When the cooling fan springs in to the action, it can get very loud and uncomfortable to listen to, especially if you're in a quiet room. That's one of the drawbacks of using such a small, yet powerful laptop. It can warm a fair bit, too, especially if you use it on your lap. On a flat, solid surface the unit got only lukewarm during our tests.

Security can be handled by a SmartCard or the fingerprint reader and it can be managed through HP ProtectTools. Anti-theft technology from Computrace is supported, there is support for drive encryption and a TPM 1.2 is installed. The chipset also supports vPro for remote management.

All up, this is a good effort by HP that should appeal to users who want something small with good performance. It does feel a little too heavy for its size, but it's solidly built and fairly comfortable to use and it has lots of features. That said, we think it should come with an SSD and integrated 3G as standard, and it could also use USB 3.0.