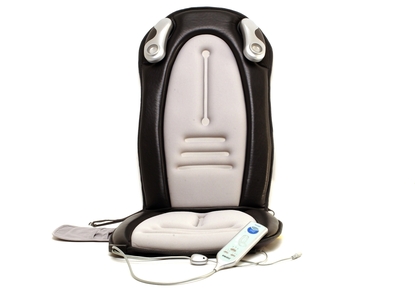 A fun and funky product, the iCush performs its functions respectably, but it doesn't excel.

The Homedics iCush is an interesting take on game peripherals, in the same vein as the Pyramat S2000 Sound Rocker. It's a vibrating gaming seat with inbuilt speakers, but its quality isn't as good as we hoped it would be. Nevertheless, the iCush is versatile. Its vibrating massage pads can be used with MP3 players, gaming consoles, DVD players, and more.

Essentially, the iCush is comprised of two components: the vibrating massagers (there are four pairs), and the speakers. The speakers are mounted at the upper corners of the seat and are on swivels, which allows them to be positioned according to factors such as a user's height and posture.

Despite their somewhat small size, they actually delivered reasonable sound quality during our tests. They don't produce high-level audio output, but for the iCush's intended uses and considering its price range, the speakers are impressive. Distortion was noticeable only at the highest volume levels, and treble and mid-range frequencies were both reasonably clear and had good presence. Bass frequencies were flat and, at times, unnoticeable, especially during gaming, where explosions and gunfire were left sounding tinny.

The vibrating massage feature on the iCush is quite cool. The speed and intensity of the vibrators can be adjusted, and any of the four sets of vibrators can be used at any time. By adjusting these settings during our tests, it was easy to get comfortable.

The overall performance of the iCush does leave something to be desired. The audio sync feature makes the massage pads vibrate in time to whatever audio it's currently playing. As cool as this might sound, it just doesn't work out very well in the end. The vibrations are triggered by any audio, not just the audio coming from the attached input device, which means that people talking, footsteps, even ambient background noise, will make the iCush start shaking and rumbling.

This actually becomes quite distracting, as the noise from the vibrators can overpower the speakers if they're not set at a high enough volume level, and it also doesn't help to create a very realistic experience. Although feeling the iCush vibrate in response to gunfire and explosions is fantastic, this lack of distinction marred what would otherwise have been a great experience.

What we do like is the design of the iCush. It's incredibly thin, and can be placed over a chair or couch, meaning that the user doesn't have to sit on the floor to use it. This also makes it quite portable, although it does rely on a power adaptor and needs to be close to a wall outlet. A wired remote control is used to adjust the massage and audio sync features. A power cable and the audio input cable are located at the bottom corner of the seat, and are fairly easy to keep out of the way. These cables are also lengthy, meaning the iCush doesn't have to be positioned very close to a TV screen when used during gaming, for example.

In the end, the biggest selling point of the iCush is its versatility. It can be plugged into an MP3 player, computer, DVD player, gaming console or stereo system. When it isn't plugged in to an audio source, the massage function can be used on its own. Users looking for a specific gaming seat, massage chair or music player will be better served by other products, but for users after a more versatile all-in-one product, the iCush does a good job of mixing all three of those functions.