This budget 47in LCD TV has 100Hz motion-smoothing technology 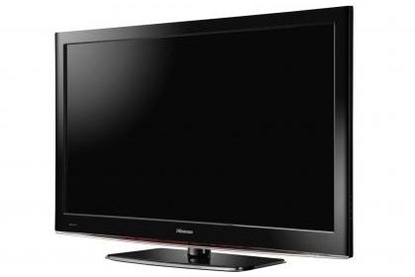 The Hisense HL119V88PZ is a 47in LCD TV with a budget price tag and a decent feature set. It may be a little low in the contrast stakes for watching high-definition video content, but apart from that it is a good television for a casual watcher who wants a large screen for a small price.

The Hisense HL119V88PZ is a budget 47in LCD TV with a 100Hz mode. Marketed at a very reasonable price, it’s a big screen with decent picture quality, although enthusiasts would be well advised to look further afield.

Like the HL81V68P, the Hisense HL119V88PZ LCD TV has simple piano-black design and a slightly curved bezel; it's unspectacular but not awful. The remote is similar — slightly cheap with little effort put into the design or placement of buttons, but adequate for day-to-day use. Three HDMI inputs are enough for connecting several devices like a games console and a personal video recorder; we swapped between a Microsoft Xbox 360 and a Sony PlayStation 3 for testing. Analog connections are available in the form of VGA, S-Video, component and composite but we opted for the more convenient digital HDMI port during testing.

Where this TV struggles is with its contrast ratio. At 4000:1 it’s significantly higher than the similarly competitive Kogan 1080P-47 LCD TV (which only has a 1600:1 native ratio) but still worlds away from the lofty 40,000:1 ratings of Panasonic’s latest LCD TVs.

For watching broadcast television we found the Hisense HL119V88PZ LCD TV acceptable. Its contrast ratio is high enough to do justice to the 1080i broadcast stream of One HD’s sports footage, and other video was accurately displayed. When switching over to play high-definition games and Blu-ray movies, though, we found that the Hisense HL119V88PZ wasn’t showing all the detail available. Significant black crush and blown-out highlights in the default picture mode are able to be largely remedied by tweaking settings, but compared to our benchmark Pioneer plasma the difference was night and day. Picture quality is still decent, but if you’re keen on watching high-definition video you may find yourself disappointed by the lack of fine image detail.

For a cheap television, we were surprised with the good implementation of a 100Hz frame doubling mode. Dubbed Vivid Motion, the mode smooths out 50Hz video inputs; we found it only introduced a slight amount of blur in fast-moving sport and wildlife videos.

If you’re looking for a cheap TV that offers a lot of screen real estate, Hisense’s HL119V88PZ LCD TV is a reasonable option. We’d weigh it up against competitors costing a little more, though — you can make the decision whether it’s the best choice.