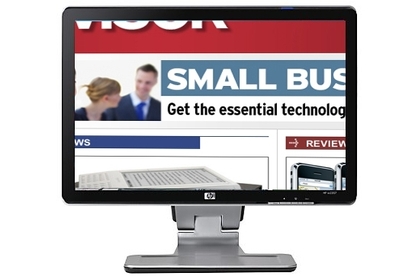 The HP w2007 is a 20in display that's a good all-around widescreen monitor with interesting features such as built-in speakers and a shiny, high-gloss screen. Its limited viewing angle and lack of colour controls might not please picky photographers and discerning designers, but it would be a fine fit for surfing the Web or working on Microsoft Office documents.

There are two big trends in the desktop LCD display business, and the 20in Hewlett-Packard w2007 offers both: widescreen designs and high-gloss screen coatings.

One downside is the HP w2007's mediocre viewing angles and limited adjustability may turn off people who are shopping for performance over value.

Setting up the HP w2007 was easy enough. It weighs just over 6kg, and we had no problem snapping the unassembled base into place and lifting it up to its resting spot.

The widescreen HP w2007 features a 1in, glossy black frame with rounded corners that doesn't quite match up with the metallic case behind the frame. There is a gap between the front and back sections of the bezel, and the black frame is a little wider than the silver back, so it hangs over the side a bit.

The HP w2007's black frame is also a little shorter, making for a clumsy, slapped-on kind of look. This arrangement is designed to accommodate HP's Easy Clip Accessory kit, an added extra that consists of four hooks and holders that you can attach to your display to hold flowers, headphones and photos. We tried these out, and although it's a cute idea, we don't think we'd actually use them.

The w2007 has two inputs, a DVI and an analogue VGA connector. There is no USB hub, and you can't adjust the height or pivot the monitor; these capabilities are available in other HP displays in the same product family.

But the w2007 does include two rear-facing 2W speakers. Why rear-facing? HP says that it allows for the elimination of speaker bars on the side or bottom of the display, which gives a cleaner look. The company also says that these speakers have been designed to sound great when you're sitting in front of the display.

The audio from the speakers was passable -- they're much better than the speakers that are built into the Mac Pro we were using for testing, but that isn't saying much. The big downside to these speakers will be felt by people in open work areas, especially those without walls behind their monitors. You could easily annoy your co-workers with the HP w2007's rear-facing speakers.

When we first connected the display to a 2.66GHz Mac Pro, the HP w2007 lit right up and booted into its native 1680x1050 resolution. At its default settings, the display was very bright, although a little washed out, losing some highlight detail.

There were also some problems with the red tomatoes and red peppers in one of the standard test photos we view; the images contained blotchy, low resolution-like artefacts. After calibrating the HP w2007, we were able to bring back much of that highlight detail, but there were still some artefacts visible in the reds.

If you don't have a calibrator, you won't have a lot of options for changing the way colours on the HP w2007 look -- beyond adjusting brightness and contrast -- as there are no colour controls available in the on-screen menus.

We like glossy screens, and the HP w2007's screen makes blacks look blacker; colour seems to pop more than with matte screens. Some complain about glare and reflection, but this screen's gloss didn't bother us at all.

A slight distraction was the relatively narrow viewing angle. Rated at 160 degrees -- both up and down as well as left to right -- there were noticeable colour shifts, and we experienced contrast loss quickly when shifting our heads away from the front of the screen. If you work closely with other people and regularly find a group gathering around your display, the HP w2007's narrow viewing angle might be an issue; otherwise, it will probably not affect you.

One thing the HP w2007 was very good at was displaying text. Even at small point sizes, text was very legible in our tests.