You'll pay a bigger price for this inkjet, but you can print bigger things on it 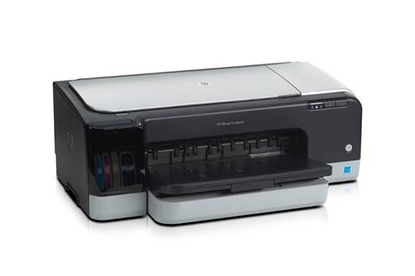 It won't replace your graphics department's high-end colour laser printer, but for drafts and for other kinds of office users it's worth considering.

In our tests on letter-size paper, the K8600dn produced text pages at a snappy rate of 13.8 pages per minute (ppm). It managed from 2.6ppm to 4.1ppm printing various colour images. We didn't test its speed in printing wide-format media, but it would probably be slower because it would have to print more.

The K8600dn's print quality was competitive with that of other models we tried. On plain paper it produced crisp, dark text that compares well to the laser standard. Graphics and photos seemed a bit grainy, but still natural. Even closely spaced lines on one of our toughest samples appeared surprisingly good. On HP's own photo paper, images tended to look a little dark, losing some detail along the way.

The ink system consists of tanks that load into bays behind a front-panel door. Two printheads — one for black and yellow, the other for cyan and magenta — lurk beneath the printer's top panel. Long, transparent tubes snake between the printheads and the tanks. HP uses a standard suite of four-color documents to determine page yields. The standard-size tanks cost $US15 to $20 each and last an impressively long time, from 830 to 1070 pages depending on the color. The high-yield tanks ($25 to $35) last from 1510 to 2450 pages.

The printheads are $60 each to replace. HP wouldn't confirm page lives for these items, but on the company's own Web site we found one of the printheads listed as having a 41,500-page life when used with another, regular-size (not wide-format) HP printer. Because the Officejet Pro K8600dn would print much larger documents, the printhead likely would wear out sooner — perhaps around 10,000 pages, which is still a long life.

The paper-handling can be a bit daunting. The K8600dn has a roomy 250-sheet input tray whose lid functions as the 150-sheet output tray. Loading paper is difficult; you can raise the tray a small amount initially, but lifting it higher requires some force and produces disconcertingly loud friction noises. Adjusting the tray to accommodate the many possible media sizes can also be complicated.

Installing the automatic duplexer is pretty easy, but the piece replaces the straight-through paper-path component. If you want to use thicker media from time to time, you'll have to keep track of the straight-through feeder and reinstall it as needed. A version of the printer without the duplexer costs significantly less.

For many offices, the Officejet Pro K8600dn would be overkill. Groups who need to stretch their printing capabilities will find this machine a capable device. Its quality isn't quite good enough to replace the high-end colour lasers that larger graphics departments need; but even in that kind of environment, it might be useful for producing drafts or giving a single user their own local printer.