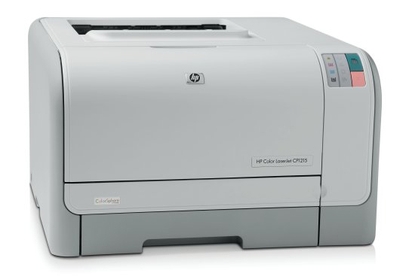 You can’t expect a $390 colour laser printer to demonstrate the very latest in performance and quality. However, for those who primarily want decent graphics, and who would also like to occasionally run off text jobs, this printer is better than its low price tag would suggest. It’s not fast though, so patience will be required.

You probably wouldn't guess the price tag from the HP CP1215's looks alone. It's not the most eye-catching printer we've seen, but the casing is sturdy enough. Perhaps the slightly loose sliding mechanism on the paper tray is a hint, and we did need to wrestle with the printer for a few minutes before getting it to work. Sadly the majority of lasers also follow the HP's lead in providing very limited printed documentation.

The HP CP1215's 600x600dpi resolution is boosted to 2400dpi courtesy of HP's ImageREt technology, and 16MB of RAM is installed. Only manual duplexing is included, and you don't get any luxuries like Wi-Fi support. Up to 150 sheets can be fed into the paper tray at once, although we wouldn't recommend going much above 100. With the output tray built into the top of the printer though, you shouldn't have any problems with pages falling onto the floor.

Colour lasers should combine the sharp and fast text output of mono lasers with the gorgeous picture capabilities of colour inkjets. But whether the CP1215 is to your liking may well be a question of how you like your text output.

Pages of text were a little on the light side and the overall quality was slightly inconsistent. Characters were cleaner and better defined than on a typical inkjet though, and unless you're after pristine text, we imagine the average user getting by. If you're mainly going to be using the printer for text, we'd recommend you look elsewhere.

Graphics were another matter though. In contrast to the text, the colour was a little too dark on the default setting. After a few minutes of tweaking though, we were churning out some extremely vibrant and exciting images. The colour was still just a touch on the dark side (if you like prints to be bright rather than brooding, you might want to try and see this printer in action before buying), but the results were very eye-catching.

Speed isn't a great asset of the HP. Colour prints ran at less than two pages per minute, and text came out at the relatively sluggish rate of 8.7ppm — even the $320 HP LaserJet M1120 MFP can manage almost double this. Running costs, though, aren't any more expensive than with the majority of cheap laser printers.