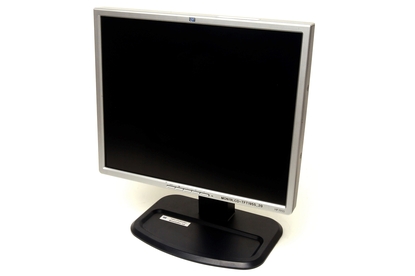 Dual inputs, pivot functionality and height adjustment make the HP L1955 a quality screen at a reasonable price. And a three-year warranty doesn't hurt either.

HP's L1955 is a well-specced 19" TFT monitor suited to any use. The panel runs at 1280 x 1024 pixels; a standard resolution for a 19" model. Weighing 7.5kg, the L1955 is well built, albeit with a slightly blocky appearance. The unit measures 40 x 21 x 57cm, which is about average. The screen face can be tilted and pivoted, while a telescopic base allows for straightforward height adjustment.

The display includes two inputs--both DVI and VGA--and the user can switch between them. This feature is becoming more common on current-generation screens, and it makes them ideal for driving two PCs at once (possibly a primary PC and additional server or router).

The screen features a thin bezel and five buttons on the front panel. The on-screen menu is well designed, easy to use and extremely quick. You're not kept waiting while the display switches from DVI and VGA inputs. The auto-configuration is also zippy and does a reasonable job of configuring the display for general use. We found a few extra changes to brightness and colour settings enhanced the image even more.

There was a slight difference in image quality between the analog and digital inputs, with the DVI connection offering superior definition with light shades. It was noticeable when looking at greyscale image-testing charts, but not during general use.

One elegant feature of the screen is a built-in four-port USB hub. Two connectors are on the rear of the housing, while the other two are on the side for easy access.

The screen boasts a wide viewing angle of 176-degrees, but the contrast dropped quickly as we tried to view it from either extreme. In motion testing, the image blurred slightly in high-speed scenes, but it would still be adequate for light gaming or watching DVDs. In fact, the L1955 is a great all-round display at a reasonable price.

The bundled software is straightforward, and HP includes a screen rotation application to drive the pivoting function. A three-year warranty rounds out an already solid feature set.