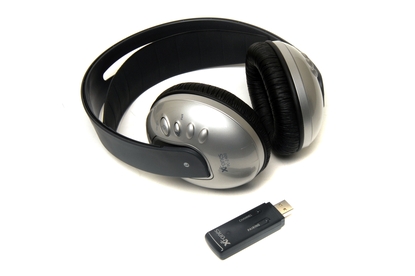 The Hauppage Xfones PC2400 is a set of mid-range headphones which will suit someone who wants consistently good audio without being tied to the computer. Audiophiles will notice the flaws in the sound quality but for the regular consumer, it's right on the money.

The Hauppage Xfones PC2400 are 2.4GHz wireless headphones designed to be used with a PC. With a range of up to 10 metres, they are ideal for those that don't want to be chained to a desk via a headphone cable but don't need to venture too far. Contrary to their aesthetic and build quality, they produce surprisingly good audio and are very comfortable to wear.

The Xfones aren't comparable to a high-end set of headphones but are certainly worthy of consideration when looking for something that can produce excellent audio at a low cost. They are lacking both bass and treble but only at either extreme of the spectrum. However, they do a good job at separating different audio elements without losing fidelity. While the bass is a little muddy, it is far from unbearable and even though the higher pitched sounds are slightly muted, most users won't notice all that much. For a set of wireless headphones, they perform quite admirably and with virtual surround sound via the included CyberLink PowerDVD 7 software, they are ideal for PC and notebook users that want a complete multimedia experience.

We tested the headphones with various tracks across a variety of music genres. The orchestral music easily won out with instruments heard clearly throughout the performances. The R&B and Hip Hop tracks also sounded great, though the bass-line riffs often sounded a little hazy.

To watch movies, we switched over to the 5.1 virtual surround sound mode. While the effect was noticeable, it was obviously simulated as some panning effects didn't quite turn out how they would on a proper 5.1 Dolby system in the home.

The package includes a USB dongle/RF base station which has a button that allows you to sync with the headphones. There is also a button to change to another broadcast channel should the user experience any interference on the default one. Setup is very simple. All you need to do is plug it in and the Xfone does the rest. If you want to watch DVDs, you can install the provided software but it is optional.

The design of these headphones isn't too flash. At first glance they looked cheap and flimsy. However, after using them for an extended period of time, we are left with an overall feeling of satisfaction especially considering how comfortable they are. The speakers cup the ear nicely and produce a good seal making them cancel noise fairly and also avoiding any audio leakage. Despite the good grip they have on the head, they aren't too tight at all.