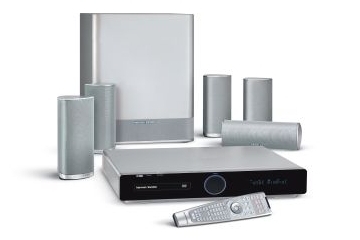 If you can put up with the terrible remote and a slightly longer than normal setup, the HS 500 is a great home theatre system. Its price means it won't be within everybody's budget, but those after high quality audio will not be disappointed with this product.

With an RRP quite a bit higher than many other home theatre in a box packages, the Harmon Kardon HS 500 is a high end product for the discerning listener. While not everyone will be able to appreciate the qualities of this system, those who are after something a little better than the norm will be more than satisfied with this package. It does have a few issues, including a ridiculously sluggish remote and irritating set up, but the overall package is worth the asking price.

Harmon Kardon has, in the past, impressed us with the quality of their audio, and the HS 500 is no exception. The five satellite speakers (two surround, two front and one centre) along with the subwoofer, managed to create an exceptionally organic sound, which was surprisingly neutral overall. Generally, speakers tend towards being either dark (bass heavy) or bright (emphasis on treble), but the HS 500 is fairly well balanced, with no obvious emphasis either way. This is a refreshing change from the typically dark home theatre systems we normally review.

The speakers exhibited excellent separation and great detail, with bass that extended very deeply and tended towards being slightly slow. The detail in the treble gave it quite a gritty sound, with some slight harshness evident in certain places. This isn't necessarily a bad thing, it just means the HS 500 is a little less musical and a little more revealing. If you're the sort of person who enjoys hearing their music in a realistic, detailed way, then this is a great system for you. You should also note, the subwoofer has a volume control on the back, which allows you to tailor the amount of bass easily and quickly, so those that do want a darker sound can achieve it easily. Furthermore, there are both bass and treble controls in the menu which affect the output of the satellite speakers, allowing further tweaking if necessary.

After our music listening, we progressed onto surround sound tests, and again were impressed. Cranking the bass up a little left us more than satisfied. The subwoofer hurled bass around the room, and the satellite speakers offered excellent positional audio, with everything spread out nicely around us. The two surround speakers weren't quite as prominent as we'd have liked, but a little tweaking in the settings corrected this, and improved the overall experience even further.

We also ran some video quality tests, connecting the HS 500 to a rather impressive 63in Fujitsu plasma television via HDMI. Everything ran very smoothly. There were a few noticeable artifacts and a reasonable amount of noise while watching The Matrix, but this is to be expected from a DVD, and the overall picture was as good as that produced by most high quality DVD players.

Aside from HDMI, all the usual connectivity options are there, including component and composite for video, and optical, co-axial and RCA for audio.Also present is a USB slot. The standard surround modes are supported too, including DTS, Dolby Digital and Dolby Pro Logic II.

In addition to regular music and movie playback, the HS 500 also offers support for a variety of file formats, supplied either using a data disc, or via the USB connection. These include MP3, WMA, MPEG, JPEG, AVI music and DivX. We tested the playback briefly and everything operated well.

Aesthetically. the HS 500 looks quite good. The speakers are small but extremely heavy, which lends a feel of superior craftsmanship, while the subwoofer is just the opposite, taking up a huge slab of space on the floor. The dull silver colour scheme looks good, but isn't anything outstanding. However, the certain minimalist look of the overall design means many will find appealing. The main receiver unit has little in the way of controls, with just power and eject buttons, and a large, somewhat disguised volume knob.

This means you have to rely on the remote to do virtually everything, which leads on to our main complaint about the unit. The remote is one of the least responsive controls we have ever used. It took us anywhere from two to five button presses to register a command, which became extremely frustrating. It was almost impossible to get basic tasks done, like navigating the menu and changing settings. We tried new batteries, aiming at different parts of the unit, and sitting in different positions, but none of them had any effect.

The only other issue we had with the system was its setup. It uses a standard speaker wire and screw plug connection for each individual speaker, which in itself isn't a problem. But the plugs are packed together really tightly, such that hooking up certain speakers was very difficult without disturbing those already connected. This wasn't a huge problem, and we had the system set up in about half an hour, but it did add some unnecessary time to the setup process.