Method is behind the CL's radical styling 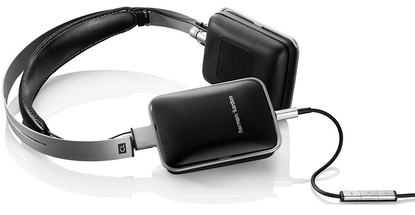 Harman Kardon’s CLs tick all the right boxes for a pair of on-the-go headphones. All audio - be it music, movies or audiobooks - are played with gusto, while the design keeps extraneous perversions out and your music private. The cups do sit too snug over long sessions, but it’s preferable over stiff bands.

Swivelling cups, two braces and a little exposed wiring are some of the confronting design elements that give the CL headphones unique character. So many moving parts lend the impression these headphones are frail, but that first impression is simply wrong.

Perhaps the most confronting design cue is its two-part head brace. Typically headphones have one taut bow charged with pressing cups snugly against your ears. Lots of cushioning is needed to ease the pressure and create the sensation of comfort. Ironically ‘comfort’ and ‘pressure’ are counter productive.

Not surprisingly Harman’s approach differs. Instead of having one component that tries to be comfortable and rigid, they have two. Acting as an exoskeleton is a sandblasted steel frame. This part can be interchanged as it comes in two different head sizes.

Then there’s a secondary brace resting on the inside. Roughly an inch separates the two and the inner skeleton will soak some of the space up when worn. The result is a bow that feels less imparting and more accommodating.

Good on-ear headphones form a seal between the cups and your ear to keep perverting noise out, privatise your music and generally improve the quality of music playback. The fact the bow focuses on comfort means the arms have to pick up the slack in order to form a perfect seal. And they do just that.

Leatherette cups press firmly against the lobes of ears to muffle extraneous noise and keep the soundstage clear. They do so comfortably over an hour-long listening session. Continue jamming for two or more hours and the CLs begin to take their toll.

Taking the show on the road

The on-ear recipe put together by Harman Kardon works well with the CL headphones. Volume is generous and, although on ear headphones tend to have less space to work with, rarely did we feel tunes were cluttered.

Listening to The Fray’s Shadow and a Dancer was properly enjoyable. Lead singer Isaac Slade takes charge with vocals echoed by electric notes. Then a layer of depth is added when soft bass drops. It’s low and bodied, and although there are just three parts to the song thus far, the CLs proved skillful in using space as a fourth element.

The track progresses to a tapestry of different instruments, a chorus of singers and an undertone of bass throughout, and even at the uncomfortably loud levels of full volume, the CLs didn’t skip a beat. Mainstream rock is one genre the CLs have down-pat.

Volume idled during most of our sessions at around 25 per cent. The CL’s ability to operate so smoothly stands testament to its passive noise cancellation and the 40mm drivers at work.

Peel the magnetised grille off for a quick look at the mechanics at work. Harman Kardon claims the unique design of its baffle improves the bass performance. The cups themselves round at the back in an ingenious effort to milk more space from the form factor.

Testing the low-end necessitated a song from 2001: Dante Thomas’ Miss California. The track flaunted the CL’s heavy take on bass when demanded by a tune. Belting bass from a pair of on-ears is a feat, but there were signs the CLs could do with more space. Bass feels as though it is originating from one point, rather than creating the sensation it’s enveloping.

Then there’s the way the CLs handle classics like Michael Jackson’s Billy Jean. The CLs match the tune’s energy in volume and tact, all the while paying close attention to tiny details, like the faint sound of the late Jackson clicking his fingers.

Harman Kardon’s CLs tick all the right boxes for a pair of on-the-go headphones. All audio—be it music, movies or audiobooks—are played with gusto, while the design keeps extraneous perversions out and your music private. The cups do sit too snug over long sessions, but it’s preferable over stiff bands.