If you require a glitzy status symbol that doubles as a Blu-ray player, the Harman Kardon BDP 10 is a worthy choice. Just be mindful that there are cheaper, more feature-packed models on the market.

The Harman Kardon BDP 10 is a high-end Blu-ray player aimed squarely at society's upper crust. With an RRP of $999, it is significantly more expensive than other top-tier players, such as the Sony BDP-S760 and Panasonic DMP-BDT300 — both of which boast 3D capabilities and wireless connectivity.

Eschewing such fancy features, the Harman Kardon BDP 10 relies on elegant looks and robust audio to justify its price tag. Video performance is also excellent, but we can't help but feel that a $999 Blu-ray player should offer something more. For the asking price, it's just a teensy bit underwhelming. On the other hand, if you want to impress people with your elitist/esoteric hardware, the BDP 10 should fit the bill.

With dimensions of 66x440x352mm and weighing close to 4kg, the Harman Kardon BDP 10 is one of the biggest Blu-ray players we've tested. It even gives hard drive–equipped DVD recorders a run for their money (the 500GB Sony RDR-HDC500 measures 72x430x258mm, for example). To put it another way, this thing could swallow the Kogan Blu-ray Player Slim whole.

All in all, we were a little disappointed with the BDP 10's design. While its understated looks are certainly elegant, they also fail to reflect the player's high-end status. To be honest, we're not exactly sure what we were expecting. [Gilt edges perhaps? — Ed.] All we do know is that the aesthetics didn't blow our socks off — which is kind of the point of investing in a prestige brand. That said, the silvery grey finish is smart and unobtrusive: it will look right at home in almost any home theatre system. We just wish it was a bit flashier is all.

The Harman Kardon BDP 10 comes with a standard suite of connectivity options: component (YPbPr), composite AV and HDMI outputs are all included, as well as coaxial and optical digital audio outputs. An Ethernet connection takes care of BD Live downloads, although there are sadly no Wi-Fi options. Front connections are limited to a USB port, which naturally supports WMA, JPEG, MP3 and DivX files. 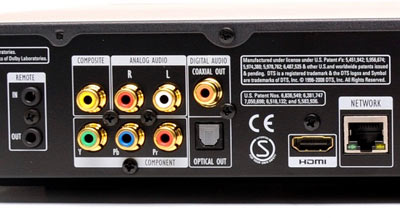 One thing we loved about the Harman Kardon BDP 10 was its menu interface. Everything is laid out in an intuitive, beginner-friendly fashion; you can elect to view USB files directly from the start-up menu, for example. The screen is also quick and responsive, with none of the annoying pauses that mar some Blu-ray payers.

Special mention must also go to the Harman Kardon BDP 10's remote. It's one of the best Blu-ray controllers we've used, sporting large responsive buttons that are backlit into the bargain. It also looks suitably swanky, with an interesting club head and silver-lined edges. (If only the designers had spent more time on the actual player, eh?)

The Harman Kardon BDP 10 managed to impress us on the audio front, despite lacking multichannel analog outputs. It comes with onboard decoding for DTS-HD Master Audio and Dolby TrueHD for significantly crisper sound, with support for up to 7.1 channels. Provided your home theatre system is equipped with HDMI, the Harman Kardon BDP 10 will not disappoint when it comes to audio. 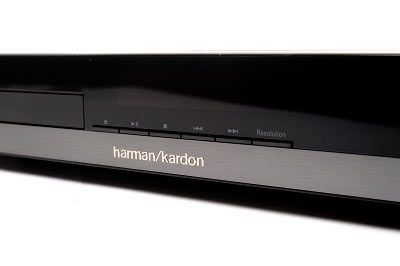 To test the Harman Kardon BDP 10's video performance, we hooked it up to a 50in Pioneer KURO PDP-C509A307112 plasma TV and watched the Blu-ray edition of Braveheart. The moors of Scotland (or Ireland as the case may be) were sumptuously coloured, with plenty of fine detail in the swaying grass and shimmering waters. Images were a little on the soft side, but not to any detrimental degree (if anything, it added a desirable ‘filmic' quality to the picture).

The chaotic battle scenes were similarly well rendered, with no noticeable ghosting or image tearing. On the downside, we found blues to be over pronounced; especially the face paint worn by the Celtic warriors. (However, this probably has more to do with the film's Blu-ray transfer than the BDP 10's imaging prowess.) In any event, the Harman Kardon BDP 10 acquitted itself well when it came to Blu-ray playback. It easily holds its own against anything else on the market.

We were also quite pleased with the player's DVD upscaling capabilities. The Harman Kardon BDP 10 outputs DVDs at 1080i, and for the most part, the results were very impressive. The lobby scene from The Matrix was vibrantly realised; everything looked that little bit sharper — from the shattering fragments of marble to the whorls in Keanu's shoes. If you own a large collection of DVDs and are in no rush to replace them, the Harman Kardon BDP 10 will serve you well.

The Harman Kardon BDP 10 took one minute and 10 seconds to load our copy of Braveheart — a disappointingly sluggish result.