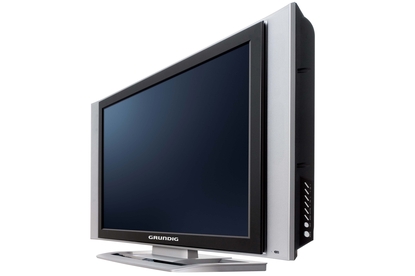 The Grundig Xentia is a good television set with an interesting design, above average performance and enough inputs to cater to most peoples needs.

Grundig has released the 40 inch Xentia LCD, a television with bold design choices that makes it stand out from the mainstream. Combined with the Xentia's above average performance this is a strong contender for your lounge room.

The Xentia's silver side speakers curve inward almost enveloping the panel. With a piano black bezel, the panel sits on top, protruding from the speaker chassis. The effect is attractive and sophisticated. The unit is a little thicker than many we have reviewed.

The Xentia has two component inputs, two SCART connections, both DVI and 15 pin D-Sub connectors, two composite connectors and an analogue tuner. This is an impressive array of choices, the only noticeable omissions being HDMI and a digital tuner. We would have liked the tuner to at least handle digital standard definition signals, a direction many manufacturers in the industry appear to be taking.

We found the remote control that came standard with the unit to be confusing as the buttons are not clearly marked but instead follow a naming convention of abbreviations which can only be deciphered by consulting the manual. The calibration options are fairly standard with brightness, contrast, colour, sharpness and tint but no control of the individual colour elements. An interesting feature, and one that isn't seen in many televisions, is the complete graphic equaliser available for tweaking the speaker output. If getting your hands dirty with the calibration options isn't your idea of fun, the Xentia comes with a series of pre-installed settings to choose from for both sound and vision. However, the visual pre-sets were a little spotty in their performance especially the "Dynamic" setting which tended to saturate the image in red. We recommend using the standard setting on this unit or manipulating the image manually.

The sound quality of the speakers is quite good. It held true at high volumes without any distortion and produced an excellent, rich sound platform. We have seen many televisions with basic speakers and they sounded reasonable but the speakers on the Grundig are quite exceptional and produce a soundstage that feels almost like faux surround sound.

We tested the standard definition capabilities of the Xentia using a range of tests. The Digital Video Essentials still patterns help the reviewer discover any shortcomings the panel may exhibit. By the same notion, tests using both the Philips CE 2006 demo DVD and the lobby scene from The Matrix also help show up any problems a television is having in properly displaying an image.

The Philips CE 2006 test was handled reasonably well showing less motion jitter than many other televisions we have reviewed. The colour tests showed good separation and depth with high detail. Contrast and sharpness tests showed no problems, flesh tones were drawn with no stepping or loss in detail. Part of this series of tests plays a soccer video in which we noticed a high level of detail in the pitch as well as fast motion without the ghosting problems sometimes exhibited on LCD televisions.

The Matrix tests were also handled well with only a few minor problems. The colour reproduction was impressive with no discolouration, however there was some over-sharpening of edges creating minor compensation artefacts. Just as the other tests we performed, we noticed no stepping on skin tones in this test either although we did find some pixel fluctuations between high to low contrast areas. At a comfortable viewing distance these issues don't affect the image enough for them to be considered problematic.

The Digital Video Essentials tests showed a convergence problem in the black and white block tests causing a yellow fringing on the right side of the screen and a blue fringing on the left. There was no noise on the block colour tests and greyscale was rendered well without discolouration and only a small amount of noise in low grey (20% amplitude). This helps explain the contrast issue seen in earlier tests since grey is the base of all colours in LCD televisions.

The native resolution of the Xentia is 1366x768 making it perfect for 720p content with the ability to scale to 1080i. We tested at both these resolutions by connecting the Xbox 360 video game console to the panel. There was no discernable difference between both signal formats, showing that the scaling on the Grundig is quite well implemented. The images are clean and free from any image noise or artefacts. The colours are exceptional and edges are rendered beautifully without any of the over sharpening or aliasing as shown in the standard definition tests. Playing video games on a 40 inch television like this is an experience to behold and due to the high quality of the Grundig panel, there were no problems to report that hampered gaming. Even the response time of 8ms was more than adequate.

We connected to the Xentia via the RGB D-Sub connection and ran our performance tests using DisplayMate Video Edition. The over-sharpening problem was also apparent here with text appearing a little too sharp, but it wasn't a big enough problem to preclude it being used as a supplemental PC monitor. Despite the text issue, the sharpness test showed excellent pixel draw and the moire pattern showed only minor pixel fluctuations, a pleasing result. The noise in low grey was not present in these tests and both the colour and greyscale intensity ramps were rendered well.

This is quite a good LCD television set with an interesting design, above average performance and enough inputs to cater to most peoples needs. For a 40 inch model, it is good value.