The Grundig Roam is a digital radio that's easy to use 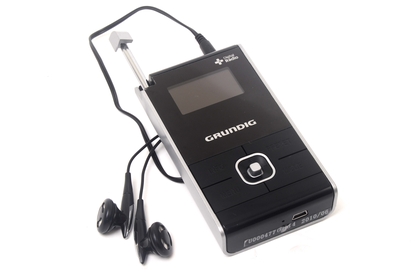 The Grundig Roam is a portable DAB+ digital radio that is extremely simple to use but it is perhaps a bit on the pricey side for the features it offers.

The Grundig Roam (GPR800DAB) is a handheld digital (DAB+) and FM radio that performs relatively well, but it could use some extra features.

The Grundig Roam doesn't look as sleek as other portable digital radios we've seen, such as the iRiver B30. It's finished entirely in plastic and it has a matte silver back and glossy black front. At a first glance, the Roam seems bulky for a portable digital radio. However, it only weighs 48 grams (including the supplied earphones), compared to the iRiver B30's 98.8 grams.

Similar to the Bush Walker DAB+ digital radio, the Roam has a dual-line LCD screen with the option of an adjustable backlight. The Roam has four large plastic buttons surrounding a central four-way joystick that is responsive, firm and easy to use. On the right side of the Roam, there is one button to control volume and on the top edge of the device there are power and lock buttons. We really liked the large buttons: they make life easy and you won't be fiddling around to find the right controls. There is a telescopic antenna on the top-left of the Roam that extends to about 20cm, and a 3.5mm earphone jack is located on the-top right of the unit.

The Roam is extremely easy to use. You change DAB+ stations using the joystick and switch to FM by pressing the 'Mode' button. The Roam lets you save up to 40 station presets (20 DAB+ and 20 FM).

The sound quality of the Roam was solid when listening to both digital and FM frequencies. Digital radio stations were crisp and had good clarity. Some FM radio stations had some inference but we found that using the antenna or plugging in headphones improved the sound. The supplied earphones produce a flat sound and lack bass, but overall they were satisfactory. The 0.5 Watt speaker that's built into the radio was also adequate but because it is located at the back of the device, the sound is muffled if you leave the Roam lying flat on the table.

Grundig states that the built-in rechargeable battery will last around eight hours before you have to charge it via mini-USB cable (a power adapter is included) and our battery test found this claim to be accurate.

Although the Grundig Roam is a solid digital radio player, it has a steep price tag and it doesn't offer extra features like MP3 playback. The Bush Walker only offers digital radio but costs $129, while the $299 iRiver B30 offers DAB+ reception and is also an 8GB MP3 player.