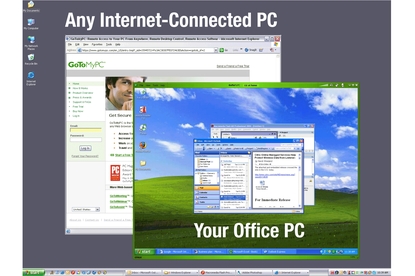 With its slightly unfriendly user interface, GoToMyPC is best for those that wish to work remotely but don't need to share files with others. The service is useful for remote troubleshooting.

GoToMyPC is just as easy to use as LogMeIn and marginally more secure. To set up you simply download the software and create an account with a username and password.

However, GoToMyPC also requires an access code to be assigned to each system to provide an extra layer of security. The software lacks LogMeIn's clear interface but, once we'd entered the access code, the target PC's desktop was immediately visible.

The service then works in the same way as LogMeIn, allowing you to open and edit documents and launch any program on the remote PC. Files can be transferred to and from either PC at the click of a button, although we found the drag-and-drop method to work equally well.

Transferring an 18MB file between PCs took slightly longer than LogMeIn: seven minutes. But the ability to use both PCs while GoToMyPC session is in progress impressed us. A chat function lets you interact between the two systems, which should be useful for situations when you're using the service to sort out others' PC problems.

Unlike LogMeIn, GoToMyPC doesn't enable you to securely share files with others. However, a dedicated option allows you to print documents stored on the target PC through a device connected to the local system; it's also possible to listen to music and system sounds through the local PC.